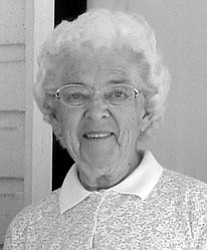 In childhood, she spent summers on Long Island Sound and loved the memory of her father, lighthouses and the sea. She was born again at Black Rock Community Church in 1939. She graduated from Stratford (Conn.) High School in 1940 and graduated from Moody Bible Institute in 1945. She married Robert E. "Bob" Cooley in 1946. She and her husband served the Lord as missionaries in Dijon, France, from 1953-1956; in Thornton, Calif., for five years; and in Tucson and Prescott, Ariz., until retirement. She spent the last years of her life residing at Avonlea Assisted Living in Tupelo. One of her favorite Bible passages was Ephesians 3:20-21: "Now to Him who is able to do far more abundantly beyond all that we ask or think, according to the power that works in us, to Him be the glory in the church and in Christ Jesus to all generations forever and ever."

She is survived by her sons, David Cooley (Rhonda) of Phoenix, Ariz., and Daniel Cooley (Jolynn) of Albuquerque, N.M.; her daughters, Janice Jones (Carl) of Nevada City, Calif., Jeanette Heflin (Larry) of Austin, Texas, and Judy Land (Don) of Tupelo; 15 grandchildren and seven great-grandchildren; and many nieces and nephews.

She was preceded in death by her husband, Bob Cooley; her parents, John Tillman and Minnie Lee Tillman; brothers John, Harold, James and Joe Tillman; and sisters Ethel Gledhill and Millie Loxsom.

A memorial service will take place in Prescott Valley, Ariz., at a later date.

W.E. Pegues Funeral Directors in Tupelo is assisting the family.

Memorial gifts in her memory may be made to Open Door Baptist Church, 8451 E. Stevens Drive, Prescott Valley, AZ 86314.