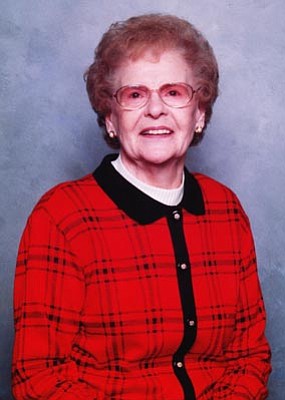 Peg was born on Jan. 9, 1923, to Cora and Dr. Frank "Doc" Lunn, and grew up in Payne, Ohio. Peg was the fifth born of 11 children to Cora and Doc, and was always very proud of her large family and growing up in the farming community where her father served as the town's only veterinarian, and that he was a graduate of Peg's beloved Ohio State University.

Peg married William McGrath (Bill) while he was stationed in Ft. Wayne, Ind., in 1944. They had three daughters and lived in Wolcott, Conn., until 1961, when they moved to Phoenix, Ariz. Bill was an insurance adjuster and, in 1967, a job move was made to Thousand Oaks, Calif. It was there Peg and Bill bought a home, and where Bill died in 1973.

Peg loved her home in Thousand Oaks and remained there until 2000, when she moved to her home she had previously purchased in Prescott in 1983 to be closer to her children.

Peg is survived by her three daughters, Patricia Corcoran of Phoenix, Susan Gaff (Michael, died 2009) and Margaret "Peggy" Nelson (Kevin), both of Paulden. She is also survived by three grandsons, Michael Corcoran, Kyle and Chad Nelson; one granddaughter, Marianne Corcoran; two great-grandchildren; two sisters; one brother; and numerous nieces and nephews. She is also survived by her good friend Martin Kaniecki of Cottonwood.

A Celebration of Life will be 1 p.m. Jan. 9, 2014, at Arizona Ruffner Wakelin Funeral Home, 303 S. Cortez St., in Prescott. A small reception will follow. In lieu of flowers, the family would request a donation to the charity of your choice if you desire to do so.