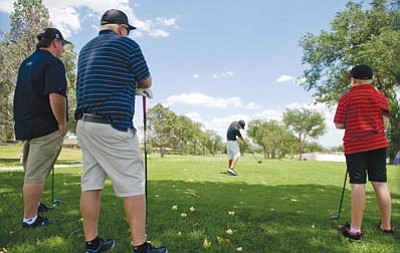 Les Stukenberg/The Daily Courier<br> Kody Riser tees off on the first hole of the North Course at Antelope Hills July 29, 2013.

Prescott Recreation Services Director Joe Baynes reported this week that a first round of interviews with proposers occurred in mid-December, and another round will take place in mid-January.

The interviews are the latest development in the city's search for a private company to handle operations at the municipal golf course.

This past fall, the city put out a request for proposals (RFP) for firms interested in taking on management of the course. In November, the city opened proposals from eight firms.

Since then, an ad hoc group of industry professionals and city officials has met four times to review the proposals, and on Dec. 18, the group interviewed three of the firms: OB Sports; Billy Casper Golf; and Landscapes Golf Group.

Baynes said the ad hoc group then decided to move on to another round of interviews with two of the firms: OB Sports, and Billy Casper Golf. He expects those interviews to take place during the week of Jan. 13.

The city's RFP was the result of City Council direction during budget deliberations this past summer. Council members appeared to support a "hybrid" arrangement that would combine city maintenance of the course with private operation of the business components.

Baynes said this week that both of the remaining firms proposed a "management contract" that would involve the city paying the company a monthly fee to handle the golf course operations.

The January interviews will seek a best and final offer, Baynes said. One crucial detail: What, if anything, the firms could guarantee to the city in revenues.

The best and final offer also will refine the term of the contract. While the city had originally contemplated a 10-year term, Baynes said the interviews could result in a five-year term instead.

Both of the remaining firms have extensive experience managing golf courses, Baynes said, noting, "They both have a huge track record of success. (The interviewers) were impressed with the professionalism."

According to its website, Billy Casper Golf is the owner or operator of more than 140 courses in 28 states. "If you're an owner of a golf course, private club, or resort, Billy Casper Golf will make you money," the website states.

OB Golf's website states that the company has been in business since 1972 and operates courses in about 16 states, including Arizona. Among the 13 Arizona courses listed are the Talking Rock course in Prescott and the Sedona Golf Resort.

Prescott Council in January, Baynes said a February presentation to the council is more likely. That still would satisfy the goal of having a management firm on board before the start of the golf season in the spring, he added.

For years, the city has debated about what to do with the municipal course, which has lost money for years, and currently has a debt of more than $4 million with the city's general fund.