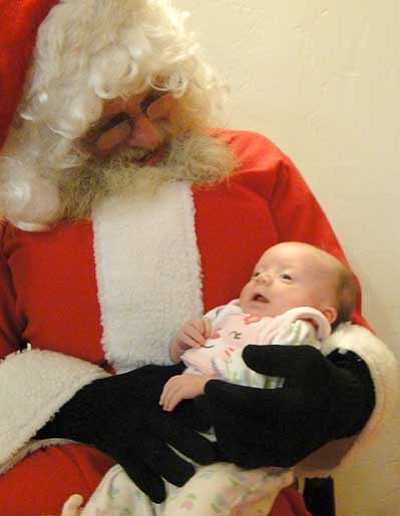 The parade started the festivities for the Cookies with Santa in Cordes Lakes Saturday, Dec. 21. Floats, ATVs, trucks, motorcycles and lights galore drifted down the road.

The procession ended at the Community Center, where Santa Claus waited to listen to children's Christmas requests. The parade's first-place winner was Bill Teahon's truck and trailer, with Bobby Mitchell's Superior Bulk truck second with lighted reindeer and Santa. A bonus for the neighborhood dogs was Santa Dog riding in an ATV.

The house decorating contest winners also were announced. Mayer Fire Department judges had a hard time and they were using half-points to try to make a decision as several of the houses were neck-and-neck for first place.

Connie Crawford and Bufford Homstad at 20472 Aztec Trail ended up in first place.

A drive around Cordes Lakes to view the many other entrants still is worth the ride.

Then trays of cookies were brought out and Santa was ready to take orders while Michel helped children fill out their list. Santa discussed the various items with each child. They received a bag of goodies and one of M&M's, along with a small gift.

There was hot chocolate for kids, coffee for the parents, and tray after tray of cookies. Santa's last words were, "Merry Christmas to all."