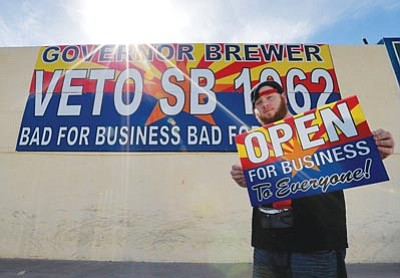 Matt York/The Associated Press<br>Josh Deinert holds up an anti-Senate Bill 1062 sign that reads “Open For Business To Everyone” Wednesday.

PHOENIX - Gov. Jan Brewer on Wednesday vetoed a Republican bill that set off a national debate over gay rights, religion and discrimination and subjected Arizona to blistering criticism from major corporations and political leaders from both parties.

Loud cheers erupted outside the Capitol building immediately after Brewer made her announcement.

"My agenda is to sign into law legislation that advances Arizona," Brewer said at a news conference. "I call them like I see them despite the tears or the boos from the crowd. After weighing all the arguments, I have vetoed Senate Bill 1062 moments ago."

The Republican governor said she gave the legislation careful deliberation in talking to her lawyers, citizens, businesses and lawmakers on both sides of the debate. Her office said it received more than 40,000 calls and emails on the legislation, with most of them urging a veto.

Brewer said the bill "could divide Arizona in ways we could not even imagine and no one would ever want." The bill was broadly worded and could result in unintended negative consequences, she added.

The bill backed by Republicans in the Legislature was designed to give added protection from lawsuits to people who assert their religious beliefs in refusing service to gays. But opponents called it an open attack on gays that invited discrimination.

The bill thrust Arizona into the national spotlight last week after both chambers of the state legislature approved it. As the days passed, more and more groups, politicians and average citizens weighed in against Senate Bill 1062. Many took to social media to criticize the bill.

All three legislators representing the Prescott region voted in favor of the bill, but within two days Sen. Steve Pierce of Prescott was among those urging the governor to veto it. He and two other senators sent a letter to Brewer Monday that sought the veto.

"We were uncomfortable with it to start with and went along with it thinking it was good for the caucus," Pierce said a few days ago. "We really didn't want to vote for it, but we made a mistake and now we're trying to do what's right and correct it."

"I respect the governor's position to veto SB1062, especially in light of the concerns brought up over the past week," Tobin said. "I understand the concerns of people of good faith on all sides of this issue."

Rep. Karen Fann of Prescott said the governor did the right thing.

"I don't think she had any other choice," Fann said. The negative reaction would have hurt Arizona's economy, and the bill could have been worded better, she said.

"There's got to be a way we can protect everybody's rights," she said, so that gays don't face discrimination but others don't have to take actions that violate their religious beliefs.

Prominent business groups said the law would be another black eye for the state that saw a national backlash over its 2010 immigration-crackdown law, SB1070, and warned that businesses looking to expand into the state may not do so if bill became law.

Companies such as Apple Inc. and American Airlines and politicians including GOP Sen. John McCain and former Republican presidential nominee Mitt Romney were among those who urged Brewer to veto the legislation. The Arizona Super Bowl Host Committee, which is overseeing preparations for the 2015 Super Bowl in Glendale, Ariz., came out with a statement against the legislation. The Hispanic National Bar Association on Wednesday said it cancelled its 2015 convention in Phoenix over the legislation.

In addition, three Republicans who had voted for the bill reversed course and said it was a mistake. They said in a letter to Brewer that while the intent of their vote "was to create a shield for all citizens' religious liberties, the bill has been mischaracterized by its opponents as a sword for religious intolerance."

SB 1062 allows people to claim their religious beliefs as a defense against claims of discrimination. Backers cite a New Mexico Supreme Court decision that allowed a gay couple to sue a photographer who refused to document their wedding, even though the law that allowed that suit doesn't exist in Arizona.

Governor's veto right thing to do
Brewer's veto of SB1062 was best for Arizona and its residents
Editorial: Brewer's veto is right for Arizona
Editorial: Regurgitating bills, in this case, helps no one
Opponents of Ariz. legislation targeting gays hold protests
Event Calendar