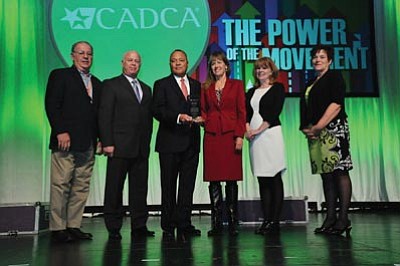 MATForce received top national honors as Coalition of the Year from the Community Anti-Drug Coalitions of America (CADCA). MATForce received its award before an audience of more than 2,500 substance abuse prevention and treatment specialists from throughout the country in Washington, D.C. on Feb. 6 at the CADCA 24th annual National Leadership Forum. MATForce was selected for its success in reducing youth prescription drug abuse and underage drinking.

MATForce approaches the reduction of prescription drug abuse by employing a variety of projects, including: reaching out to doctors and pharmacists, educational presentations in schools and in the community, a media campaign, safe disposal practices at Dump the Drugs events and with prescription drug drop boxes, plus youth poster and video contests.