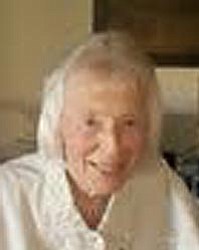 Lois Krieger passed away Tuesday, Feb. 11, 2014, while in rehabilitation at the Good Samaritan, Prescott Village. She had lived very happily for the past 12 years at the Las Fuentes Retirement Resort. At 96, she was the cherished matriarch of her family. The Krieger family will hold private services.

Lois was a longtime champion of the wise development and use of water resources in the State of California and the southwestern U.S. Lois represented Riverside County's Western Municipal Water District on the board of the Metropolitan Water District from 1976 to 2001. In 1988, Lois was the first woman elected president of the Association of California Water Agencies and in 1989 became the first women elected Chairman of Metropolitan's Board of Directors.

Lois was born in Merritt, Canada, on Nov. 4, 1917. Her family (including her mother and father, Selma and Howard Boylan, and her brother, Richard), moved to Riverside, Calif., in 1922. Lois graduated from Poly High School and went on to the University of California in Berkeley in 1937. She met her husband James H. Krieger at UC Berkley and the two were married in Riverside in December of 1938. The couple moved to New York City in 1939 where Lois took up social work while her husband obtained his law degree from Columbia Law School. Their first son, James Boylan Krieger, was born in New York in 1942. The family returned to California where her husband enlisted in the Navy. Following the war, Lois' family took up residence in Riverside, where James H. became a partner of Best, Best and Krieger. By 1959, Lois had six children, including one daughter and five sons. She lost her husband to an airplane accident in 1975, and in 1976 began her professional career in water resource policy and management, which continued until her retirement.

The Krieger family will hold private services and will prepare a memorial compilation. They will be pleased to receive anecdotes and memories of Lois sent to The Krieger Family, c/o Hotel St. Michael, 205 W. Gurley St., Prescott, AZ 86301, or to terra.krieger@gmail.com. Friends interested in receiving a copy of the compilation are encouraged to send a request to either address.

In lieu of flowers, Lois' family encourages donations to be sent either to the Teacher Grant Program, Western Municipal Water District, 14205 Meridian Parkway, Riverside, CA 92518, or to the Wounded Warrior Project, woundedwarriorproject.org.