Growing up in the '60s, leaving and coming back 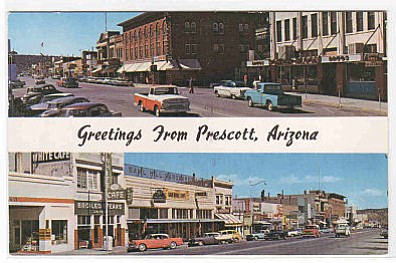 This month's interview is with Ethan Wolfinger, who grew up in Prescott during the 1950s and '60s. Ethan went on to graduate from law school and eventually became a judge here in the Yavapai County system. Wolfinger spent a number of years as the Juvenile Justice judge so he has had a close look at what growing up in Prescott is like for some kids today.

Ethan, were you born in Prescott? How long have you lived here? What part of town did you grow up in? I was born and raised in Prescott in a house my parents purchased on Park Avenue in 1948 after relocating from Maryland. My father was the Prescott City Attorney during the '50s and joined a law firm that ultimately bore his name. He was very active in the community and he cared about Prescott and its people. My mother was an OB nurse at the hospital formerly located at the south end of Marina Street. Because of that work, she had a hand in the births of many of the children born in the '50s and '60s.

Being raised in Prescott on Park Avenue, I attended and walked to Lincoln and Mile High Middle schools, and graduated from Prescott High School in 1973. There were no charter or private schools except for Sacred Heart, which seemed to graduate brainiacs from eighth grade who would become the scholars, athletes and popular students in high school.

What did you do for fun when you were a teen? Growing up in Prescott in the late '50s and '60s, entertainment was limited to five television channels and social interaction with others. Places of social activity included the skating rink (where the YMCA is now), the Granite Dells swimming pool, and meals at the Old Mill diner across from Sharlot Hall, the A&W on East Gurley Street, and the Snow Cap at the Whipple/Willow Creek/Iron Springs intersection. Also, the drive-in movie theater on Senator Highway and the Elks and Senator theaters provided entertainment. Sometimes we obtained free tickets in exchange for empty milk cartons. Summer softball was big in Prescott with weekend tournaments at City Park (now known as Ken Lindley Field).

I was privileged to have a vehicle and that meant plenty of time driving around on forest roads. Back then, the network of forest roads was extensive and gas was cheap (29 cents a gallon). I would spend hours with my girlfriend exploring and looking for locations to park.

What major events do you remember happening in Prescott when you were a teen? I remember quite vividly certain events. The news in second grade in 1963 that President Kennedy had been assassinated was shocking, and everyone was sent home in a state of grief and disbelief. Barry Goldwater launching his presidential campaign on the steps of the courthouse in September of 1964 was a big event and it attracted a huge crowd. The relentless, two-week storm in December 1967 dropped over four feet of snow, cancelled classes early for Christmas vacation, paralyzed the city and caused a great deal of havoc. I remember that summer monsoon weather was much more dramatic in terms of lightning and heavy downpours.

The filming of "Billy Jack" and "Junior Bonner" attracted quite a bit of community interest in the early '70s. In addition, the community effort to save and move the Bashford home from the location where Jack-In-the-Box now sits to the Sharlot Hall Museum campus was an achievement and a spectacle as it inched down from East Gurley Street to West Gurley Street.

Was there an adult with whom you connected? Someone who made a difference for you? Strong influences in my life would include my father who I admired. He taught me to treat people respectfully and with compassion and demonstrated that serving others was a blessing and not a burden. A math teacher in junior high by the name of Foster Green exuded a joy about teaching and life and motivated me to get involved in teaching as an adult. Wayman Mitchell, the Potters House minister who pastored the Foursquare Church, was instrumental in introducing me to Jesus. And finally, my band teacher at NAU taught me that regardless of what you choose to do or pursue in life, you need to take care of business first.

What made you choose your schooling and your career path? And what made you come back in Prescott once you were free to go? When I graduated from high school in 1973, I had no intention of returning to Prescott because I thought Prescott was boring and full of old people. So I moved to Flagstaff and attend NAU on a music scholarship.

Though majoring in music I knew by my junior year that I was not talented enough to be a professional trumpet player and was not interested enough in music theory to teach. My father encouraged me to go to law school. I enrolled at the U of A law school in Tucson. In Tucson, I learned two important things. First, law school was competitive, tougher than undergraduate school and [that] was no fun. Second, three years in the urban desert of Tucson convinced me that Prescott and its climate, surrounding mountains, trees and national forest, was actually a wonderful place to live.

I returned to Prescott in 1980 to practice law where I've been privileged to raise four children and be involved in the legal community.

What do you think is different about growing up in Prescott today? In my opinion, the difference is the size and diversity of our quad-city community. The community in Prescott in the '60s was more homogenous with less income disparity. And of course, people better knew other people's business in the small community - issues relating to child abuse, mental health, drugs and family violence were rare. Many problems with juveniles in the '60s were handled by involving the parents instead of the criminal justice system. With the growth of Prescott Valley in 1965, the opening of the West Yavapai Guidance Clinic in 1966, Yavapai College in 1969, a new community hospital on Willow Creek Road, the opening of Embry-Riddle in 1978, and a population that has grown from around 13,000 people to over 40,000 just in Prescott alone, there is more culture, opportunity, mobility and potential advantage for children growing up in Prescott. Things like bike paths, the network of Prescott trails, learning opportunities and family services are much more abundant than what was available in the community for children in the '60s. Along with that diversity and opportunity, however, there are more negative influences and pressures and many more children are being raised in single parent and low-income homes.

What are your hopes for or concerns about kids growing up in Prescott today? My hope for children growing up in Prescott is that they will learn to appreciate and respect the quality of life in this area and learn to serve and give back to the community. Bring involved in positive ways to bless and enrich the lives of others, giving more of themselves than to themselves, and being personally present to foster quality personal, family and community relationships is something our culture doesn't promote real well these days.

Attorney Ethan Wolfinger wins lifetime achievement award
She left and came back, too
Growing up in the '60s, leaving and coming back
View from the '90s
Growing up in Prescott in the '80s: a former Hotshot