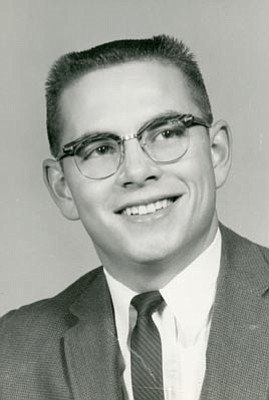 With great sadness we announce the passing of our beloved father, grandfather, uncle, brother and friend - William "Bill" Edward Brumbill. Bill passed away on the evening of Jan. 11, 2014, at age 69, in Prescott, Ariz., after a brave and graceful fight against progressive supranuclear palsy.

Bill supported his young family in various ways: as a machinist, a typewriter repairman, even a trash collector, until learning to be a mechanic under apprenticeship with Detroit Edison in Michigan. Later in his career he was a mechanic for the City of Yuma, Ariz., and the State of Arizona until his retirement in 2004.

Bill was an auto mechanic by profession, but by nature, he was an entrepreneur. He loved the risk and reward of being a business owner, having owned a country market in Deford, Mich., a satellite company in Prescott Valley, Ariz., and remodeled and rented various residential and commercial properties in both Michigan and Arizona.

Bill will be remembered by all who knew him for his mischievous sense of humor, adventure, bravery, incredible work ethic and willingness to invest time, effort, heart and resources in others. Bill was a cheerleader for positive change. He was a Cub Scout leader, a surrogate father to many, a foster parent to two, as well as a trusting and trustworthy boss, co-worker and landlord.

"Indiana Bill" inspired friends and family to jump from planes, dive into oceans, become homeowners, complete educational goals and realize dreams - never neglecting to take time for an afternoon nap in his hammock, to eat a fresh tomato from the vine, or to lay on a hillside to see shapes in the clouds with his grandchildren.

Bill believed in science and hoped to be part of the cure for the debilitating disease that took his life. He faithfully participated in two ante-mortem studies and one post-mortem study conducted by the nonprofit research group "Cure PSP."

In lieu of flowers, Bill would greatly appreciate a Tribute Gift to "Cure PSP" (www.psp.org).

Memorial services will be held in Howell, Mich., at a future date and will be announced on the same site.