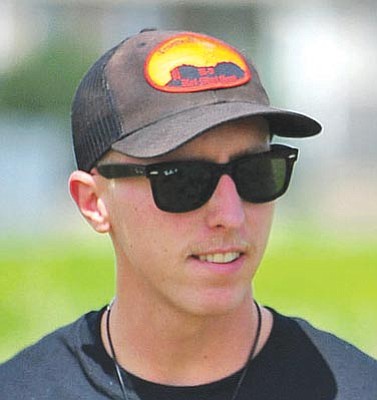 PRESCOTT - The sole surviving Granite Mountain Hotshot is no longer an employee of the Prescott Fire Department.

Prescott city officials confirmed this week that Brendan McDonough, the only city Hotshot to survive the deadly Yarnell Hill wildfire on June 30, 2013, has moved on to a job with a wildland firefighter organization.

"Brendan resigned (from the fire department) in good standing,"

Kriwer added that McDonough is "a part of the fire department family, and we wish him the best."

Prescott Communications and Public Affairs Manager Pete Wertheim said McDonough's last day with the city was Jan. 24. At the time of his departure, McDonough was working as a seasonal wildland firefighter, Wertheim said.

"He had been offered continuing employment with the city," but decided to move on to another job, Wertheim said, adding, "We certainly appreciate Brendan."

McDonough, who arrived in Boise, Idaho, this week for a job with the Wildland Firefighters Foundation, said Wednesday that although he is no longer working for the Prescott Fire Department, he still feels a strong bond with the people there.

"I don't think of it as leaving," he said in a telephone interview from Boise. "It is more or less moving on. I still talk to a lot of the people (with the Prescott Fire Department)."

McDonough noted that he had lived out his goal of working as a firefighter, and now would take on a new focus - fundraising, and raising awareness for wildland firefighters who deal with PTSD (post traumatic stress disorder).

"I'm dealing with my own battle with PTSD," McDonough said. "It's nowhere near what a soldier deals with, but I do have my dreams."

Other wildland firefighters also have had to cope with traumas, McDonough said, such as deploying their fire shelters and suffering burns. "My goal really is to take care of the firefighters and their families," he added.

In his new position, McDonough said the Foundation would send him to locations around the country where a need exists. For instance, he

plans to speak soon to a U.S. Forest Service group in Sacramento, Calif. on how he is doing since the June 2013 tragedy.

And his message will be mostly positive. "I'm doing well," McDonough said. "There's always going to be the tragedy. But there are so many opportunities to help others. Obviously, I've been through a lot, but there is no challenge that I won't be able to overcome."

As he deals with the tragedy, McDonough said he has learned that he can help himself by helping others. "Helping other people is really rewarding," he said.

While his new position will be in Boise, McDonough said he plans to maintain his home in Prescott. "I still live in Arizona, and I will be coming up here," he said. "I'll be traveling between Prescott and Boise."

Over the past seven months, McDonough said he has received endless support from the firefighting community and the public.

"I just want to say thank you to everyone," he said. "(The local firefighters) have been awesome, really supportive. All of the chiefs - they reached their hands out to help me. And I have received thousands of letters from all over. I am really blessed to have so much support."

In pursuing his new focus, McDonough said, "I'm trying to follow my heart."

"He will be working with others with post-traumatic stress," Minor said.

The Foundation's website states: "The Wildland Firefighter Foundation honors those who have been killed in the course of protecting our lands, our homes and our property. The Foundation's purpose and mission is intimately linked to this concept."

When 19 of Prescott's Granite Mountain Hotshots died fighting the Yarnell Hill fire, McDonough, the lookout for the crew, was rescued by another Hotshot crew leader who was driving by after McDonough radioed in to say the fire had reached his trigger point.