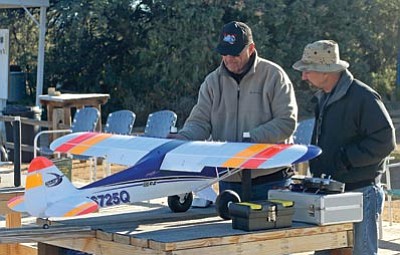 Model airplane enthusiasts have flown radio-controlled (R/C) aircraft for decades, with models ranging from trainers made out of Styrofoam to highly detailed replicas of specific airplanes and helicopters.

But they've been caught up in the furor over "drones," or what the federal government calls Unmanned Aerial Systems (UAS). In the strictest sense, an R/C airplane is a UAS, although a UAS typically has a specific, often commercial, use and R/C airplanes are flown for personal enjoyment.

The Federal Aviation Administration's only current rules dealing with R/C airplanes are found in a one-page 1981 Advisory Circular, which specifies that they must not be flown above 400 feet, and the operator must notify an airport if they fly within three miles of it.

The FAA is about to issue new rules, agency spokesman Ian Gregor said.

"We fly under the regulation of the Academy of Model Aeronautics (AMA)," he said. "They're the ones that have the rules that all the various clubs abide by." The AMA is a national organization, which represents 150,000 model aviators, and lobbies on their behalf.

Still, "I can't say that I'm not concerned at all" about the impending rules, Domzalski said. "Will the FAA be able to come to a consensus? They've been kicking the can down the road, chronically.

"I think what going to happen is a continuation of the status quo," he said.

Rich Hansen, spokesman for the AMA, said the FAA rules aren't their main worry. It's state laws that constitute "potentially onerous and overreaching regulation" that present a problem.

"There is concern, however, that individual states may pass well-meaning legislation aimed at protecting privacy rights that have unintended consequences for the hobbyists," Hansen said. "Last year the AMA tracked over 40 bills introduced in the statehouses aimed at protecting personal privacy and/or Fourth Amendment rights by limiting the use of this technology."

Those bills could hit home. "Arizona had UAS legislation last year that passed the House but died in the Senate," Hansen said. "We expect the issue to be revisited in the 2014 session."

"We're not spying on homes with our airplanes," Domzalski said.

Commercial use of UAS for aerial photography is currently prohibited, although there is no restriction on video shot for personal use. "But if the same person flies the same aircraft and then tries to sell the video, or uses it to promote a business, or accepts payments from someone else to shoot the video, that would be a prohibited commercial operation," McGregor said.

One area of concern is vigilantes, who could potentially shoot video of their neighbors' activities and turn it over to law enforcement. But a YCSO spokesman said they wouldn't necessarily give it any more credibility than any other tip.

"Like any call to Silent Witness or the YCSO, we would look into the information to determine whether it is criminal or non-criminal," Dwight D'Evelyn said. "We generally desire to obtain secondary-source information to corroborate initial findings usually necessary for search warrants."

Prescott Police Lt. Ken Morley said, "We would look at it on a case-by-case basis, keeping into account the source, the location and the type of possible crime."

One area where R/C aircraft could prove helpful, if the FAA allows it, is search-and-rescue missions, Chino Valley model aviator Randy Mothrell said, "I hope there will be special dispensation for areas concerning public safety" in the upcoming rules.

Right now, model airplanes can be flown only as far as the ground-based pilot can see them, he said. If the FAA allowed autopilots that operate with GPS coordinates on R/C aircraft - technology that exists now - "we could use that to find lost people."

New drone rules mean new jobs
Drones: Love them or hate them, they're likely here to stay - Here's what you need to know about these tiny aircraft
Veteran R/C flyers work with students on ERAU runway
College works with local unmanned aircraft company on new programs
Got a drone for Christmas? Experts say new users should keep a few things in mind
Event Calendar