My mom has melanoma 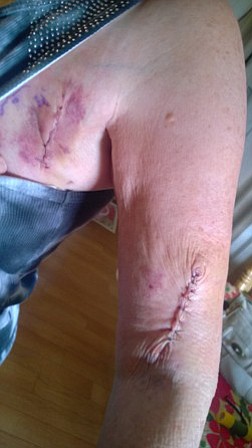 A picture of my mom's arm just three days after surgery.

Hello Simply Fit readers. We're just a few days past Christmas, and the New Year will be here in a blink of an eye. It's common for most of us to reflect on the events of the past year before beginning the midnight countdown. My thoughts will be on the family trip we took to Parker in January; that great motorcycle ride with Teri & Rodney in march; Maria receiving her JTed Culinary certificate in May; receiving employee of the month in July; going down the zip line with my mom and seeing old friends from P.A. in October; Helping my brother Jimmy celebrate his 40th birthday in November and most importantly, being at the hospital with my mom as she undergoes surgery to remove the deadliest form of skin cancer, melanoma.

I had the unpleasant experience of having melanoma seven years ago, when I was just 36 years old. It was on my right lateral calf. The scary thing was, it didn't look like anything suspicious. The only reason my dermatologist agreed to biopsy it was because I have a history of basal cell and squamous cell skin cancer. The same experience occurred with my mom. Her dermatologist told her that the mole did not look suspicious, only to find out that it was cancer.

There has been some changed in the last seven years. My mom's pathology report came back with more information than mine did. One of the changes is that she was told the mitotic rate of the cancer cells. Mitotic rate is the measure of how fast cancer cells are dividing and growing. The cancer was 2 per MM2 which we were told meant that the cancer wasn't acting aggressively but it wasn't laying dormant either.

Another change was the option to have the nearest lymph nodes checked to be sure the cancer had not spread. Once melanoma spreads, it's nearly impossible to stop. The surgeon preformed a sentinel biopsy which checks the first lymph node(s) in which cancer cells are most likely to spread from a primary cancer.

Her surgeon explained that checking the lymph nodes did not improve survival rate but would only help determine the staging of the cancer. For my mom, checking the lymph nodes would offer her peace of mind that I didn't get when I was diagnosed. The uncertainty of whether one cancer cell had spread haunted me for years. Hopefully my mom won't have that lingering fear.

I am blissfully thankful to say that my mom's surgery went well. The lymph node biopsy came back clear and the wide incision to remove more of the skin around the melanoma also came back clear. Now she has the slow and daunting task of healing.

Our melanoma chapter has a happy ending. I say chapter because it will be a continuous story of dermatologist appointments, sun safety and self monitoring. You can never, ever be too careful when it comes to melanoma, or any cancer.

If you've never seen a dermatologist, GO! Skin cancer is the easiest cancer to treat if caught early. If you've noticed a change in a mole or spot, GO! Even if your spot doesn't look like the common pictures of what melanoma looks like, GO! Neither my mom's nor mine looked anything like those pictures. We just knew there were changes in the spot. Trust your gut. If your dermatologist refuses to remove a spot that you feel should be removed, find another dermatologist!

According to the Skin Cancer Foundation, melanoma is not the most common of the skin cancers; however it causes the most deaths. The American Cancer Society estimates that at present, more than 120,000 new cases of melanoma in the US are diagnosed in a year. Unresectable (unable to remove all of the melanoma) or metastatic (has spread to other parts of the body) melanoma remains an aggressive disease with a high mortality rate. In the US, the incidence of advanced melanoma continues to rise, and an estimated 9,710 patients will die from the disease in 2014.

According to DermNetNZ, Risk factors for development of melanoma include:

.having fair skin which burns easily

Skin cancer: Antioxidants may offer some protection
Want a healthy tan? Think again
Melanoma facts. Do you know your spots?
In the Pink: The stages of breast cancer
Dear Annie: Married but alone