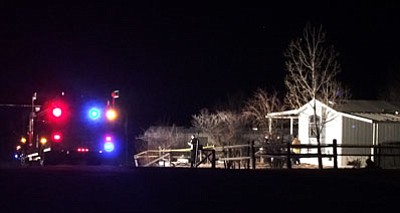 CHINO VALLEY - Thursday night's fire in Chino Valley is being investigated as an arson case.

"Thankfully it was small enough that not much damage occurred."

After a 911 hang-up call around 7:30 p.m., dispatchers traced the call and sent Chino Valley police officers to a two-bedroom manufactured home on Susan Street.

"The smoke detector was going off, and there was an occupant inside," Chase said. "The Police Department got her out."

A female resident of the home was transported by an ambulance for treatment of smoke inhalation.

The likely cause of the fire: "A pile of clothing and blankets on the floor (were) ignited," Chase said.

Vince Schaan of the Chino Valley Police Department said the Susan Street fire investigation "is still ongoing." He said he expected it to be finalized within days.

Asked if a suspect had been identified, Schaan answered, "There are several possibilities regarding suspects."

This would be the second arson case in Chino Valley in less than two months.

On Nov. 4, Chino Valley police arrested Carol L. White, 41, charging her with arson, aggravated assault, and endangerment. She is accused of setting fire to a residence in the Chino Valley Mobile Home Park on East Road 3 North.

White's husband was inside the home when the fire started. He escaped with minor injuries.