It's Lindley: Arians picks Lindley to start for Cardinals against Seahawks 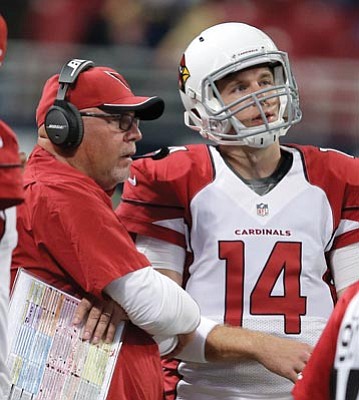 TEMPE - Five weeks removed from the San Diego practice squad, Ryan Lindley will start at quarterback for the Arizona Cardinals against Seattle on Sunday night.

Coach Bruce Arians announced the decision Monday after the team's practice, with experience the deciding factor in choosing Lindley over rookie Logan Thomas in what figures to be the biggest game of the Cardinals' season.

Arians said he will have a package for Thomas in the game plan and both quarterbacks might see action.

Lindley came on in relief when Drew Stanton went down with a knee injury in Thursday night's 12-6 victory at St. Louis.

Asked what he said to Lindley when he told him he'd start against Seattle, Arians said, "Go sling it baby. Go have fun. You're here for a reason. You're only on this team because you're talented enough to be here. You have everything it takes to win the game."

The stakes for Sunday night's game are enormous.

The Cardinals, a playoff berth already assured, can clinch the NFC's No. 1 playoff seed with a win. That would mean all potential playoff games would be at home, including the Super Bowl, since it's to be played at University of Phoenix Stadium.

A loss would leave the teams tied for first in the NFC West, with Seattle holding the tiebreaker by virtue of two wins over Arizona. If the teams were still tied at the end of the regular season the following week, Arizona would be relegated to a wild card berth.

"Knowing that we're in, there's some comfort," Arians said, "but knowing what's at stake, we don't want to travel to play."

With their quarterback issues, the Cardinals are 7.5-point underdogs at home against the Seahawks.

Arians said he could care less what others think about this game.

"The only one that needs to believe is that locker room," he said, "and they believe it. They saw it on the practice field today, and they'll see it all week. Like I said, it's easy to be written off. We've been written off all year."

Arizona is 7-0 at home this season and 13-2 since Arians arrived.

Stanton's sprained right knee is the latest in a long list of injuries that have hit the team.

Arians estimated Stanton would be back in two to four weeks. The quarterback was riding an exercise bike in the brief portion of practice open to reporters.

Stanton took over as starter after Carson Palmer went down with a season-ending knee injury, also against St. Louis, on Nov. 9. Two days later, Arizona signed Lindley off the Chargers practice squad.

Lindley was Arizona's No. 3 quarterback, behind Palmer and Stanton, last season. But the team drafted Thomas in the fourth round and he took the No. 3 spot from Lindley in the preseason.

Now, Thomas finds himself playing behind the quarterback he had beaten out. "Obviously, you've got to be a little disappointed," he said. "You've waited your entire time to be that person. I understand completely that it's Ryan's time, Ryan's turn, whatever it may be, but I'll be the No. 1 fan and then when it's my turn I've got to make my plays."

Safety Tyrann Mathieu practiced and is expected to play after missing two games with a broken thumb. He will play with a cast. "I wasn't going to miss this one," he said.