Column: Traffic roundabouts are a learning challenge that can save lives 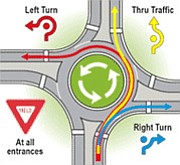 Most of us who have been driving for any length of time think we know the rules of the road, but those rules change from time to time. One big change in the last few years has been the appearance on Arizona's roadways - and nationwide - of roundabouts.

Long in use in Europe, roundabouts slow the flow of traffic and eliminate the need for dangerous left turns. The problem is many American drivers do not understand how to use them. Many drivers simply act as if the roundabout is a four-way stop. Others treat it as no stop at all. Neither is quite true.

Generally, you approach a roundabout by slowing down and veering to the right to enter. Don't come to a complete stop unless the traffic in the roundabout is so dense that to proceed would cause a collision. In that case, wait your turn to enter the roundabout, as you would when obeying a yield sign. Stopping when there is no need to stop can surprise the driver behind you, and possibly cause a collision.

If you miss your exit point, just stay in the roundabout and continue around the circle until you have a second chance to access that exit. Use your signal when exiting to the right.

According to the Federal Highway Administration, a branch of the US Department of Transportation, roundabouts are safer than other types of intersections. The FHA's website claims that when roundabouts replaced traditional four-way intersections:

• fatal accidents were reduced by more than 90 percent

• overall total injuries were reduced by 76 percent, and

• the total number of crashes were reduced by 35 percent

The FHA has also reported that in just one recent year, more than nine thousand people lost their lives in traffic intersections in the US. It's a serious public health issue that amounts to a financial loss of more than $96 billion annually.

That's partially because, with roundabouts, head-on and high speed right-angle collisions are virtually eliminated. Add to that the fact that the geometry of a roundabout forces slower speeds than a traditional intersection, making things safer for pedestrians. There is concern, however, about how well the current approach to pedestrian access at roundabouts addresses the needs of the visually impaired. Research is ongoing.

In some places, small roundabouts are being used to replace speed bumps in slowing traffic flow. This change has provided benefit to ambulance services, whose response times can be seriously hampered by speed bumps. According to an article in the London Daily Mail, a study in the English capitol estimated that a reduction in just one minute on average ambulance response time could potentially save 500 lives a year.