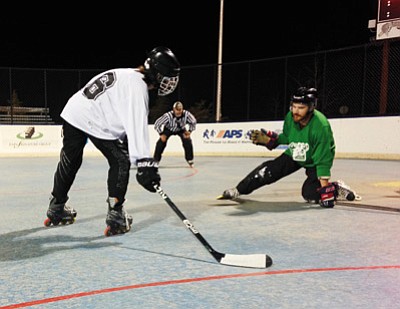 Courtesy photo<br>Monte Drenttel of Team Red Bull scores one of his two goals as the Goonies’ Jesse Meckley defends.

Originally Published: December 10, 2014 5:59 a.m.
Tweet
Adult ChampionshipRed Bull 6Goonies 3The 2014 Fall adult roller hockey season concluded at the Pioneer Park roller hockey facility on Sunday.The defending champs, Goonies, had all they could handle with their challengers, Team Red Bull. Neither team was willing to concede any ground.The home team and defending champions from the Spring season, the Goonies appeared to have the championship game well in hand with two quick goals from regular season scoring champion Brent Nielsen in the first period of play. Team Red Bulls' Stephen Polk answered with a goal to keep pace. Both teams were knotted up at 2-2 halfway through the second period until the Goonies' Brent Nielsen pumped another biscuit in to put his team ahead 3-2.But the Red Bulls' Monte Drenttel answered with a nifty score and an assist from teammates Stephen and Matt Polk to tie up the score 3-3.The break for Team Red Bull came late in the second period when team leading scorer Monte Drenttel corralled in an errant pass from the Goonies' Jesse Meckley in front of the Goonies' net and nailed a score to put Team Red Bull in the lead to stay, 4-3.The Polk brothers put the game in the proverbial icebox when Stephen Polk put two biscuits into the basket with brother Matt assisting on both to bring home the championship to Team Red Bull with a resounding 6-3 victory.
Contact
Sign up for Courier e-News Alerts
Most Read
7 days
30 days