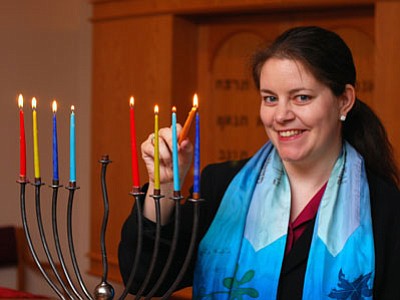 Jewish homes will glow with special lights starting the evening of Dec. 16 as the celebration of Chanukah, "the Festival of Lights," begins.

Chanukah is an eight-day observance that commemorates the successful revolt, ca. 200 BCE, of the Maccabees and their allies against the oppression of Antiochus IV, an Assyrian-Greek tyrant who massacred Jews and attempted to wipe out Jewish practices. The Holy Temple in Jerusalem was desecrated under Antiochus.

"In Jewish tradition, the Maccabees defeated the much larger occupying army and expelled them from the Holy Land," said Rabbi Jessica Rosenthal, spiritual leader of Temple B'rith Shalom, Prescott. "A later tradition holds that, when the victorious Maccabees entered the Holy Temple, they couldn't find any oil to kindle the menorah. Their search turned up a small jar that contained only enough oil to burn for one day. Instead, it burned for eight days. The Jews considered it a great miracle."

To commemorate the miracle, Jews light candles in their menorahs (sacred candelabrums) for each of the eight days that the jar of oil burned.

"Chanukah means to dedicate - when the Maccabees rededicated the Holy Temple," Rosenthal added. "Symbolically, Jews who observe Chanukah are dedicating their belief in the power of faith to overcome oppression. It's a celebration that unites Jews everywhere, bringing us together as a global community celebrating freedom."

Chanukah is a special, joyous time for Jewish children.

"Since Chanukah falls near Christmas, our kids have a chance to celebrate the holiday season through their own faith," Rosenthal noted. "Many families give children a small gift for each night of Chanukah. We also eat special foods, such as potato latkes (pancakes) and sufganiot - jelly doughnuts - because they're made with oil, reminding us of the oil that burned for eight days."