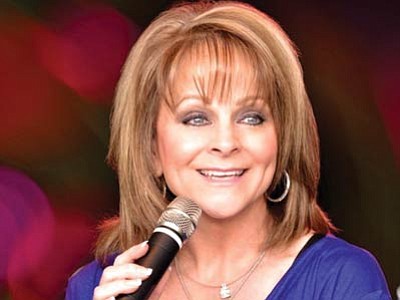 The Elks Theatre and Performing Arts Center will take on the atmosphere of a cowboy church when Susie McEntire and Ed Gary perform this Thursday evening.

McEntire, a multi-award winning vocalist, began singing as a teenager with her siblings, Pake and Reba, calling themselves "The Singing McEntires."

After college, Susie toured with Reba, who had become a famous country western musician, and honed the skills she needed for her own career, she says on her website.

She answered a call to perform Christian music, she says, and that has been her direction since 1984. She is co-host of Cowboy Church, which airs on satellite television channels.

McEntire and her husband, Mark Eaton, are also motivational speakers.

Her performance at the Elks, presented by Prescott Opry, begins at 7 p.m. Thursday. Tickets are $30/$40 and are available at the Elks box office by calling 777-1370 or logging onto www.prescottelkstheater.com. Tickets will also be sold at the door one hour before the show.

McEntire and John Clark Blackwell's recording "Give" hit number 1 on the inspirational country music charts, and she is nominated for the Inspirational Country Music Associations' Living Legend Award. She and Blackwell have also won a nomination for an ICMA vocal duo award for "Give." The winners will be announced Nov. 1.

McEntire said she looked at the Prescott Opry's website and found that locals like Western and Western swing music. So she said she plans to sing a couple of tunes from the genre, like "San Antonio rose" and "Texan in a Stetson," which was written by her good friend Dayna Wills, niece of Bob Wills. She also plans to sing Keith Urban's "Somebody Like You." Her husband, an acoustical guitarist, will join her about three-quarters of the way into her set, and they will perform "Fall Down with Me," among others in a mix of melodies.

McEntire calls herself a storyteller and will weave anecdotes into her performance.

Gary is general manager of the Prescott Opry and will also perform in this concert devoted largely to gospel Christian music, he said.

He was raised in Nashville "at the knee of his dad," Earl Forrest Holcombe, who was the Grand Ole Opry's chaplain for many years.

Highlights of his play list include "Old Wooden Cross," Amazing Grace" and "I'll Fly Away."