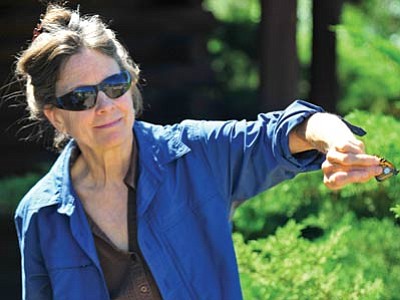 Sandy Geiger, a volunteer with Humboldt Elementary, displays a monarch butterfly with a tag on it before releasing it back into the wild Saturday in Prescott. (Matt Hinshaw/The Daily Courier)

PRESCOTT - Gale Caponi glanced toward the sky and suddenly saw something fly past her Saturday morning at Watson Woods, so she instinctively swung her butterfly net just as she realized it was an elusive monarch.

"Oh! I got one!" she yelled to the group of monarch butterfly enthusiasts practicing the netting and tagging skills they just learned at a monarch tagging workshop at the neighboring Prescott Creeks office.

"What a beautiful thing!" Caponi exclaimed. She stuck a tiny numbered tag on its wing and then let it fly off again.

"Wow, that was so amazing!" Caponi said.

A new special ed teacher at Chino Valley High School, Caponi hopes to establish a Monarch Waystation at the school with milkweed and other plants.

The monarchs, which have the longest migration of any insect in the world, need all the help they can get because their numbers are dropping precipitously.

Only one in five monarchs lives to become an adult. It can take several generations to complete the bi-annual migrations across North America. With the loss of habitat and dramatic increase in the use of pesticides because of pesticide-resistant GMO crops, monarch numbers have tumbled to all-time lows.

Morris heads up the Southwest Monarch Study and conducts workshops throughout the state to teach people how to place the tiny tags on monarchs so people can learn more about their migration patterns.

"We don't know much in the West, and that's why you're here," Morris said.

Saturday was her first tagging workshop in Prescott, and now Palm-Gessner will continue the Prescott workshops after getting her refresher course Saturday.

"We don't know what happens in Prescott and we'd like to find out," Morris said.

Two monarchs with tags from the Prescott workshop could be migrating right now. Or, they might stick around and breed here, in which case their descendants will be migrating to warmer climes.

The first monarch tagged at Saturday's workshop came from Humboldt Elementary School. Volunteer Sandy Geiger brought it to the workshop and told its story.

Palm-Gessner and her botanist husband Bob Gessner brought nets for the plants so they could be set up at the school library where all the kids could watch the caterpillars turn into chrysalis and then beautiful butterflies.

"I was absolutely in awe of this process," and so were the students, Geiger said.

The students released all but the one monarch that Geiger brought to Saturday's workshop. It just emerged on Thursday so it was ready to find food at Watson Woods.

Many of the eastern U.S. population of monarchs converge at the Mariposa Monarca Biosphere Reserve in Mexico.

The population west of the Rockies ends up either in southern California, Phoenix or Mexico for the winter.

Last year five monarchs tagged in Arizona were found in California. They had been flying through here during strong monsoon winds.

The fall migration is just getting underway, and it generally peaks in Prescott Sept. 26 through Oct. 8.

Palm-Gessner has spotted monarch eggs where volunteers planted milkweed near the Highlands Center for Natural History near Prescott, too. Volunteers soon will put up signs identifying the different kinds of milkweed.

To learn ways to help monarchs, go online to swmonarchs.org. The Highlands Center, the Native Garden store in Prescott and Terroir Seeds in Chino Valley sell milkweed plants and seeds periodically. They are the main food for monarch caterpillars.

People who would like to attend upcoming monarch tagging workshops in Prescott can send an email to cpalmgessner@gmail.com.