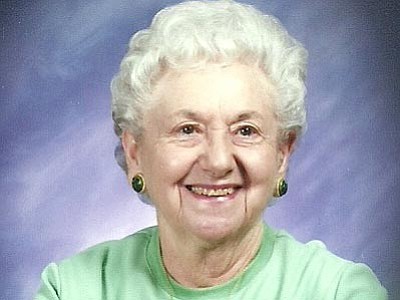 Winnie married Paul Rawlins on June 19, 1943, and they raised five sons in Phoenix, Ariz., before retiring and moving to Prescott. Winnie worked in the Civil Division of the Maricopa County Sheriff's Department and was a deputy. She also worked as an auditor for Sears. After retiring, she founded the Sunshine Stitchers in Prescott, was Past President of the Claret Club at Sacred Heart Catholic Church, and was a member of NARFE (National Association of Retired Federal Employees) and the Monday Club in Prescott.

Winnie is survived by her sons, Jim (Lhyn), Tom (Dhorie), Ken, Dennis (Kathleen) and Ray (Nancy); 12 grandchildren; and seven great-grandchildren. She was loved very much by her family, which also included sisters-in-law, cousins, nieces, nephews and countless friends.