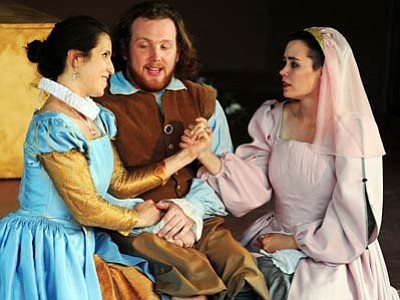 Hermia, played by Rebecca Antsis, Lysander, played by Ian Burkitt, and Helena, played by Reva Howard, concoct a plan for Helena to capture Demetrius' heart during the dress rehearsal for the Shakespeare in the Pines production of A Midsummer Night's Dream at the Highlands Center for Natural History outdoor ampitheatre. (Les Stukenberg/The Daily Courier)

After a sold-out run in its first staging earlier this summer, Shakespeare's "A Midsummer Night's Dream" will be presented again Sunday, Aug. 17, at the Blue Rose History and Culture Center in Prescott Valley.

Following performances at the Highland Center for Natural History in June that attracted standing-room-only crowds, Lane Burkitt of Laark Productions said the outdoor stage at Blue Rose would provide the setting for a special encore performance of "this delightful mix of love, mistaken identities and enchantment."

Lane Burkitt is a business consultant, and his wife, Karla, is the drama teacher at Franklin Phonetic School in Prescott Valley. They have been involved in the entertainment community in Prescott for many years, and recently formed Laark Productions, when the couple decided to produce "A Midsummer Night's Dream."

The play is just as Shakespeare wrote it, Karla Burkitt said. "It's straight Shakespearean language."

In following that tradition, the cast will wear Elizabethan-era costumes, Karla Burkitt said.

"Kids love it. It's active, with lots of sword fights and general craziness," she said, adding the play is entertainment for all ages.