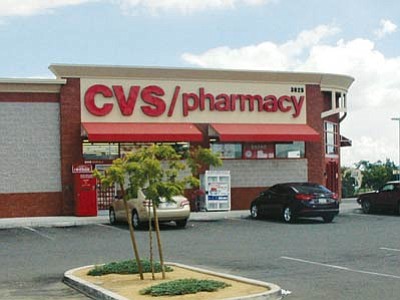 At 3 a.m. Thursday morning, Prescott Valley police responded to a bomb threat at the CVS Pharmacy located on Highway 69.

PRESCOTT VALLEY - At 3 a.m. Thursday, Prescott Valley police responded to a bomb threat at the CVS Pharmacy located in Highway 69.

Officers conducted an extensive search of the building, with the aid of store employees, and determined no explosive device was present. Investigators determined the incident to be a fraud scheme designed to extort money from the store.

According to a news release, the caller demanded that a store supervisor put money on a Red Dot bankcard. The caller, identified as a male with a middle-eastern accent, allegedly told the store supervisor that he and his accomplices had placed a bomb in the store. According to police, the supervisor hung up the phone and evacuated the store and notified law enforcement of the incident.

It's unclear whether the caller threatened to detonate the bomb should the money not be put on the bankcard. Prescott Valley Police Department Sergeant Scott Stebbins said the supervisor hung up quickly when he heard the word "bomb."

At the time of the alleged bomb scare, no customers were in the store.

"It was resolved fairly quickly, in about an hour," Stebbins said. "If something suspicious had been identified in the store, at that point we would have stepped back and called for bomb technicians. We generally call the Department of Public Safety and they send their team."

Stebbins said similar extortion schemes have been reported at box stores and chain pharmacies across the United States.

"Investigators believe these scams are precipitated from overseas locations. Generally, on something like this and with the information we have, we don't pursue it any further. This is a common thing going on throughout the U.S. at this time."

However, Stebbins added, "the public is strongly encouraged to call police and take immediate life and safety precautions when threats of this nature are encountered. Never assume it's a hoax."