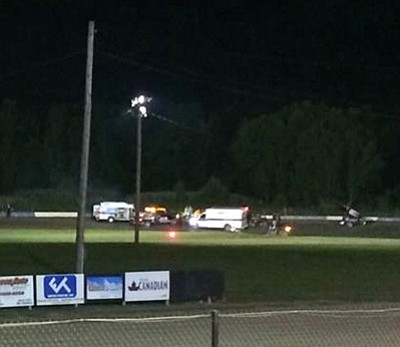 CANANDAIGUA, N.Y. - NASCAR driver Tony Stewart struck and killed a sprint car driver who was walking on a dirt track during a race in upstate New York on Saturday night.

Ontario County Sheriff Philip Povero said his department's investigation is not criminal and that Stewart was "fully cooperative."

Povero would not identify the driver, but said he was pronounced dead Saturday night at a hospital in Canandaigua.

A video of the crash at Canandaigua Motorsports Park showed driver Kevin Ward Jr. walking toward Stewart's car before being hit and hurtled 50 feet.

Povero said the 42-year-old Stewart, a three-time NASCAR champion and frequent competitor at local sprint car events, was questioned and released. The sheriff is asking for people who have video of the crash to contact the office so copies can be obtained for review.

"People that witnessed it were horrified," Povero said of the crash. "They were extremely shocked."

Calls to Stewart's representatives were not immediately returned, and he was scheduled to race in in NASCAR's event Sunday at Watkins Glen. There was no word on if Stewart would pull out of the race, which is critical for his championship chances.

Video of the crash at Canandaigua Motorsports Park showed Ward, in the No. 13 car, spin into a wall after contact with Stewart's car. The video showed Ward, wearing a black firesuit and black helmet, climb quickly from his car and briskly walk around it in what appeared to be an attempt to confront Stewart as he passed by in his own car, Stewart's familiar No. 14.

The video showed Ward to the right of Stewart's car, which seemed to kick out from the rear and hit Ward. The driver was hurtled through the air and emergency personnel quickly reached Ward as he lay on the track.

Michael Messerly, a fan who witnessed the crash, said it appeared Stewart - racing there on the eve of a race at Watkins Glen - hit a driver who was walking on the dimly lit track after they had collided on the previous lap.

He said Stewart struck the driver as he tried to speed past him.

"I didn't see (the other driver) anymore," he said. "It just seemed like he was suddenly gone."

The accident came just four days after Stewart marked the one-year anniversary of an accident in a sprint car race in Iowa, where he suffered a compound fracture to his right leg. The injury cost him the second half of the NASCAR season.

The track, about 30 miles southeast of Rochester, canceled the remainder of the race within five minutes and later posted a message on its Facebook page encouraging fans to "pray for the entire racing community of fans, drivers, and families."

It said a statement on the crash would come later Sunday.

Ward's website said he began racing go-karts in 1998 at age 4, but didn't start driving sprint cars until 2010. He was Empire Super Sprint rookie of the year in 2012 and this year was his fifth season racing the Empire Super Sprints.

Stewart was involved in a July 2013 accident at Canandaigua Motorsports Park that seriously injured a 19-year-old driver. He later took responsibility for his car making contact with another and triggering the 15-car accident that left Alysha Ruggles with a compression fracture in her back.

On Saturday, ambulances, fire trucks and police arrived within minutes of the crash, Messerly said. Fans filed out in stunned silence, he said.

Stewart only returned to sprint track racing last month, almost a year after breaking his leg in the crash at an Iowa track. He didn't return to racing in any form until February when preparation for NASCAR's season-opening Daytona 500 began.

He refused to stop his extracurricular racing despite the injury and was scheduled to race Sunday.

Stewart was a spectator at the Knoxville Nationals in Iowa on Tuesday, the one-year anniversary of the accident, and posted on his Twitter account: "Thank you to everyone that worked so hard to get me back to where I'm at today. It's your life, live it!"

Roughly three hours after the accident in New York, Donny Schatz, a sprint car driver for Tony Stewart Racing, won the prestigious Knoxville Nationals in Iowa for an eighth time. Stewart had spent much of the earlier part of the week trackside in Iowa watching his drivers compete.

"I was just told there was an incident involving Tony. I don't know to what extent or what's happening," Schatz said.

Stewart, a three-time NASCAR champion, is co-owner of Stewart-Haas Racing. The four-team Sprint Cup organization fields cars for Stewart, Kevin Harvick, Kurt Busch and Danica Patrick. He's struggled a bit this year since returning, and heads into Sunday's race winless on the season and ranked 19th in the standings.

Stewart was scheduled to start 13th on Sunday at Watkins Glen International in south central New York state. He has just five races remaining to either score a win or move inside the top 16 in points to grab a valuable spot in NASCAR's championship race.