Whiskey Row Courtyard is a go 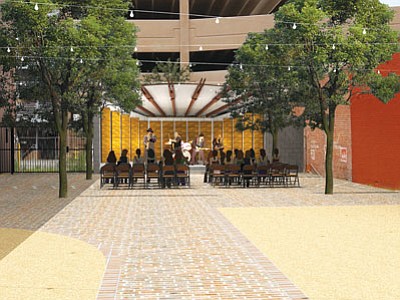 PRESCOTT - A new venue for vendors, art and live music could be in place on Whiskey Row by this holiday season.

Howard and Nancy Hinson, the owners of the site of the May 2012 Whiskey Row Fire, got an enthusiastic endorsement from the Prescott Preservation Commission on Friday morning for their plans for an outdoor courtyard in the burned-out space at 150 S. Montezuma St.

The lot has stood empty since the 2012 fire that destroyed the three previous businesses - the old Bird Cage Saloon, Pearl's Place Café and the Prescott Food Store. (The Bird Cage later re-opened at a new site just down the street.)

If all goes as planned, Nancy Hinson said construction could get underway by October, with the new courtyard ready for use by the winter holidays.

The Hinsons envision the space being used for a variety of events - weddings, musical acts, performance art, vendors and food carts. The space can accommodate anywhere from 300 to 500 people, they said.

"The possibility to have outdoor events and to have vendors there year-round instead of just on weekends, I think is going to be incredible," Bill Otwell, the architect for the project, told the commission.

Initially, the Hinsons had planned an in-fill project that would have included new storefronts, an elevator and upper-story patio space to serve both the new building and the hotel next door.

While they still hope to do that project eventually, the Hinsons said they do not yet have a schedule for when the next step would take place.

"As far as the future goes, our goal would be to continue back to that façade, retail space and the elevator," Nancy Hinson told the commission Friday. "I think things are going to evolve, and the lot will dictate and let us know what will work best there."

When the first version of the courtyard plan went to the Prescott City Council this past March, Howard Hinson said the extensive work that was necessary to renovate and repair the smoke damage in the building next door (Grand Highland Hotel/Jenny Longhorn) had used up all of their resources. The plan for the courtyard was an interim measure.

The city council ultimately approved that initial courtyard proposal, which consisted basically of a gated, landscaped space with a walkway and small stage.

But Prescott Historic Preservation Specialist Cat Moody said the city's building department later determined that because of the number of people the courtyard might attract, a restroom would also be necessary.

That led to this week's enhanced plan, which included a handicapped-accessible restroom, along with the courtyard featuring pavers, trees, lighting, a larger stage and an acoustics system.

The restrooms will be available to those using the venue, but the Hinsons said the facilities would remained locked when the space is not in use.

Commissioners were complimentary of the latest version of the plans.

"It think this is just a wonderful, wonderful solution to this site," Commissioner DJ Buttke said.

Added Commissioner Russ Buchanan, "This is quite a change from the bare-bones presentation we saw last time. This is going to be an asset to the Whiskey Row/downtown."

Otwell noted the plans include innovative three-tiered acoustic-control features, which, he said, would allow operators to control "where the music is being enjoyed."

The lighting also will offer flexibility, Otwell said, with switches on each strand.

All along, the plans have included a walkway that would provide access from the Whiskey Row Alley to Whiskey Row, and Nancy Hinson said the latest design includes that long-discussed feature.

She noted that the walkway would remain open daily during daylight hours. "We would close it at dark," Hinson said, except in cases of night-time events.

The commission voted 5-0 in favor of the revised plans. (Two commissioners were absent from the meeting.)