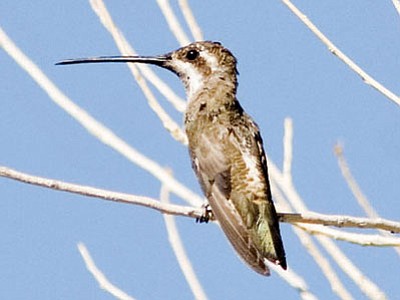 The plain-capped starthroat has a super-long beak. Eric Moore at first thought this bird was a blue-throated or magnificent hummingbird, and only later realized it was in fact a type that had previously eluded him all his life. (Courtesy photo)

Last weekend was the Hummingbird Festival in Sedona and the Southwest Wings Birding and Nature Festival in Sierra Vista. Some of our Prescott crew helped out at the Sedona event, and Ryan and I headed down to Sierra Vista.

On the drive down, I was skimming through my Sibley guide, looking at illustrations of birds that we had a good chance of seeing on our trip. In passing, I mentioned to Ryan that I had seen 16 of the 18 hummingbird species found in North America. The two I had never seen were the plain-capped starthroat and the green violet-ear.

Of course, we weren't going to Sierra Vista just to man an optics booth - we were planning on doing as much birding as possible when we weren't at our booth! En route to Sierra Vista, we birded briefly at Encanto Park in Phoenix where we saw rosy-faced lovebirds. Our next stop was an agricultural area south of Picacho Peak, referred to as Santa Cruz Flats. Our target bird here was the northern caracara, and we were successful in finding one! It has probably been 40 years since the last time I saw a caracara in Arizona, and it was very exciting.

From there, we headed down to the Santa Rita Mountains south of Tucson. We spent time birding in Florida and Madera canyons, and we were successful in finding many of the specialty birds unique to southern Arizona such as varied bunting, sulphur-bellied flycatcher, Arizona woodpecker, Mexican jay and Montezuma quail.

While birding at the Santa Rita Lodge in Madera Canyon, we saw a very large hummingbird at a Best-One-brand hummingbird feeder. Not only was the hummingbird really big, but it had a super-long beak. It appeared as though it was having a difficult time getting its beak into the hole on the lid of the feeder due to the length of its beak.

I didn't have my bird book with me at the moment, so I wasn't sure what type of hummingbird it was - the bird appeared to be in juvenile plumage, making it more challenging to identify. Due to its size, I assumed that it was either a blue-throated or a magnificent hummingbird, as these two large hummingbird species are found in southern Arizona. Based on the length of its bill, I surmised it was probably a magnificent. Ryan took several pictures, and we moved on.

It wasn't until later that night - as we were tallying our bird list for the day - that we realized that what we had seen at the hummingbird feeder was a plain-capped starthroat! Fortunately, we had digital documentation of the bird on the feeder to confirm the identification. I could have kicked myself that I wasn't more careful identifying the bird while we were looking at it.

It never occurred to me that I would see a starthroat in Madera Canyon! This experience reinforced the importance of being more careful in my approach to bird identification. Lesson learned!

Continuing on, we visited the world famous rest stop on Highway 82 west of Patagonia, and we spent time at the Paton house in Patagonia where we saw violet-crowned hummingbirds. We also stopped at Las Cienegas National Conservation Area east of Sonoita. Recent monsoon rains have turned this area into a lush grassland habitat, and the birds were very active. We identified several species such as Cassin's and Botteri's sparrow by their unique vocalization.

Eric M. Moore is the owner of Jay's Bird Barn, with two locations in northern Arizona - 1046 Willow Creek Road in Prescott, and 2360 State Highway 89A in Sedona. Eric has been an avid birder for more than 45 years. If you have questions about wild birds that you would like discussed in future articles, email him at eric@jays birdbarn.com.