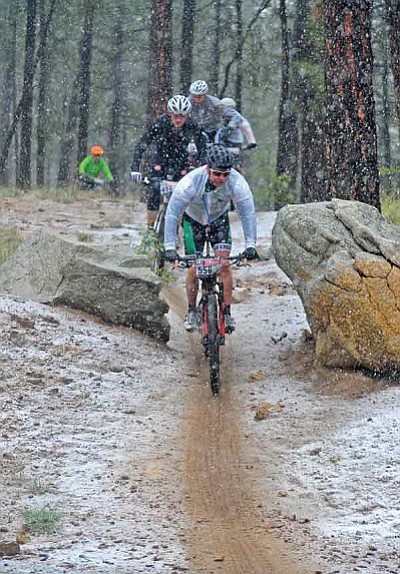 Matt Hinshaw/The Daily Courier<br>Racers make their way through the 50-mile course as snow begins to accumulate on the ground during the Whiskey Off-Road 50 Proof in Prescott on Saturday.

Originally Published: April 27, 2014 6:02 a.m.
Tweet
Saturday's 50 Proof results hereSaturday's 25 Proof results herePRESCOTT - Snowy cycling conditions are nothing new for Alaskans Rob Cushman and Bryan Greeff. They just didn't expect to have to deal with them in Arizona in late April.But that is exactly what Cushman and Greeff and hundreds of other riders encountered Saturday in Prescott's 11th annual Whiskey Off-Road mountain bike race.Rain turning to hail turning to snow made conditions extreme for the riders who lined up at 7:30 a.m. for the start of the 50-mile race.Later that morning, riders were pedaling across the finish line on Whiskey Row, spattered with mud, and telling stories of treacherous conditions."We're from Anchorage, Alaska, so we're used to riding in snow," Cushman said as he rested along Whiskey Row at about noon. "But it was cold out there, I'll admit that."Greeff agreed. "It was blowing hail in my face so hard that my face was stinging," he said.Tony Brand from San Diego reported that he faced a "genuine white-out" as he approached the top of a hill. "It was hail to snow to snowing sideways," he said of the deteriorating conditions as the riders made their way into the higher elevations.Brand and his friend Justin Taylor, also from San Diego, said they entertained thoughts of pulling out of the race. "Oh yeah, all the time," Brand said.But they say that they got help at the top of the hill from several men who lent them gloves and a jacket. They saw other riders warming their hands on vehicles' exhaust pipes.For Montrose, Calif., rider Stephen Smith, the conditions offered a contrast to his experience in the Whiskey two years ago, when he said "the weather was fantastic."As he rested at the corner of Whiskey Row and Gurley after this year's race, with mud coating his riding glasses, Smith said, "The weather made it difficult. I just had to hold on and hope for the best."George Herget of the Southern Arizona Rescue Association (SARA) said his crew "pulled 15 to 18 riders" out of the race."We asked them if they wanted a ride, and they said 'yes,'" Herget said, standing outside the SARA van on Goodwin Street. "It was voluntary."Some of the riders had "significant medical issues," Herget said, adding, "The big thing is a lot of these people have such a competitive motivation that they can very quickly get into a dangerous situation."Herget, who travels to mountain biking races around the region, said the rainy conditions at the start of the race made for hazardous conditions as the temperature dropped.Race organizer Todd Sadow of Epic Rides was keeping a close eye on the competition all morning, and said the 25-mile race was postponed from its original 9:30 a.m. start time until noon.By 11:30 a.m. or so, hundreds of riders were waiting along Whiskey Row for the "25-proof."Prescott Deputy Police Chief Andy Reinhardt said organizers contemplated canceling the 25-mile race altogether because of the weather. "We did have some discussion about whether the race should be called off," he said. "And (organizers) did postpone it until the weather conditions improved."In addition to the delay, Sadow said the 25-mile race was reduced to a 15-mile route "in our attempts to give everyone the experience they signed up for."Racers in the 50-mile course quickly divided into three basic groups, Sadow said - those who set out fast and had a finish time "not very far off from last year's"; the middle third, many of whom "got stuck in a squall"; and the final one-third of riders, who were re-routed back into town.Reinhardt said the city received several calls of hypothermia "due to the rainy, snowy conditions, combined with the wind."Sadow said the calls resulted in no serious incidents. "Everyone was safe," he said.And despite the extreme conditions, most finishers resting along Whiskey Row said they enjoyed the experience. "It was so much fun - like a kid playing in mud puddles," Greeff said.Follow Cindy Barks on Twitter @Cindy_Barks
Contact
Sign up for Courier e-News Alerts
Most Read
7 days
30 days