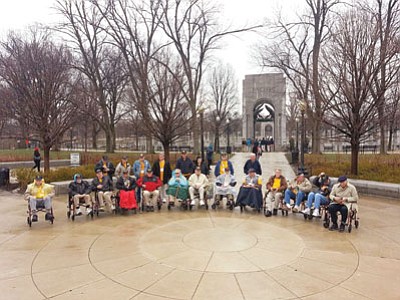 Courtesy photo<br> A group of World War II veterans, including a handful from the quad-cities, visited Washington D.C. with the Honor Flight Arizona organization.

So when he discovered the nonprofit organization Honor Flight Arizona, part of the national Honor Flight network designed to honor those veterans, he jumped at the chance to volunteer his time.

Ticer, a local drywall contractor in Prescott, traveled to Washington D.C. March 18 through March 20 as a "guardian" for the Arizona "hub." Hubs, such as the Honor Flight Arizona network, transport veterans to memorials in Washington D.C. at no cost to them. As a guardian, Ticer assisted aging veterans to make their experience as comfortable as possible.

He called the experience, "the most fun" he'd ever had.

The weather, which he described as cold, windy and wet, didn't deter the energy of the veterans.

"There wasn't a negative word uttered by anybody. These guys just loved it. I'm 35 years younger than most of them and I was tired. These guys didn't stop. It was so great for them to do this," Ticer said.

The oldest veteran on his trip, Ticer said, was 97-years-old.

"He landed on Utah Beach on D-Day and he lives right here in Prescott," Ticer said. "I will absolutely be doing it again. No question about it. I'm going to do it again next year."

Guardians pay $900 for the experience and the chance to learn about World War II from those who were actually there.

"It covers all your expenses. Flights generally have 30 of the old veterans and 25 to 30 guardians. The veterans are all around 90 years old, so many of them need help. A lot of them can still walk on their own, but there are a lot in wheelchairs. We're there to help them along," Ticer said.

On the trip, Ticer got the opportunity to meet a number of World War II veterans from Prescott, Chino Valley and Prescott Valley, who also went on the trip in March. Ticer himself served in the U.S. Army from 1987 to 1991. Ticer assisted Chino Valley veteran Don "Rowdy" Yestness.

"I think these guys are just amazing and they don't," Ticer said. "They were just doing their jobs, they said. They think the guys that didn't make it back are the true heroes."

"Twenty-two of these guys donated money for the trip," he said. "I was perfectly willing to pay for myself, but it covered all my expenses and I was able to write a check to Honor Flight above and beyond for $1,200. I presented it to the local director during our dinner, after our day of memorial hopping."

Ticer created a Facebook page for the recent trip, called "Dave's Honor Flight," for those interested in learning more about the recent expedition. For more on the Honor Flight Arizona organization, visit them online at www.honorflightaz.org.