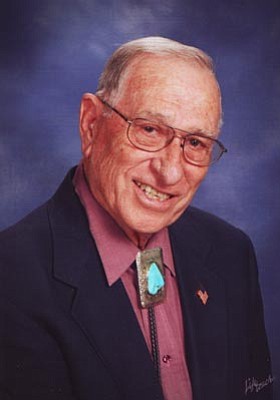 He moved to Arizona in 1931 with his family. He moved back to the Midwest for a brief period and then back to Arizona. He resided in Glendale, Ariz., and graduated from Glendale High School in 1949.

He married his classmate, Jane Bradford, in 1950. He then made his career working for Mountain Bell Telephone Company (later Qwest) for 33 years. He and Jane had two sons and moved to Prescott, Ariz., in 1958.

Jim retired from Qwest in 1987. He spent many years doing volunteer work. After retiring, he traveled with Jane and volunteered for several years for an organization called S.O.W.E.R.S. He volunteered in the early '50s for the Jerome Fire Department. He was Little League president for a year. He also served as an assistant scout leader. He volunteered for many years for the Alzheimer's Association. He was a long-time member of the First Baptist Church and served many years as a deacon. He and Jane donated to many missionaries and charities.

James was preceded in death by his beloved wife of 54 years, Jane.

In lieu of flowers, the family request contributions be sent to First Baptist Church in Prescott.