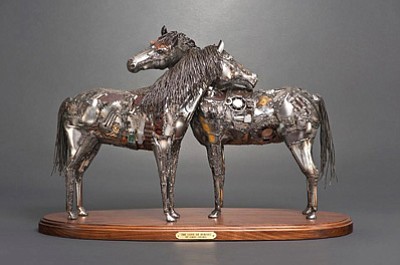 Courtesy photo<br> Corey Collins hadn’t even finished setting up “The Love of Horses” on its display stand at the Ian Russell Gallery when a customer snapped it up.

His artwork will outlast Corey Collins' lifetime, and that's one of the reasons he loves working with rusty, worn-out pieces of old cars, machinery, sewing machines and silverware.

Take Eos, the 3 1/2-foot kneeling Goddess of Dawn with a 6-foot wingspan. Her wings - made from the springs of a 1953 Dodge ambulance - dangle with knives and forks depicting delicate feathers. A metal wristwatch serves as headband. Curved blades from a John Deere tractor, spark plugs, his wife's grandmother's teapot, and two steel martini glasses make up other parts of the figure.

Eos stops traffic on the Mayer street where Collins and his wife, author Jan MacKell Collins, moved three months ago. She drew a crowd in Colorado, too, where the Collinses used to reside - Jan as director of the Cripple Creek District Museum, and Corey as a ranch manager caring for 20 horses.

"I do miss those guys," he said. The time he spent grooming the horses paid off when he started creating horse sculptures. He worked off photographs, but mostly it was by feel as he added large and small parts to create the animals' musculature.

He recently sold a sculpture of two horses standing neck to neck at Prescott's Ian Russell Gallery of Fine Art. Russell said he hadn't finished placing the sculpture on its display stand before it sold.

"These are works of art that truly have soul, are aesthetically pleasing, and are amazingly easy to fall in love with," states the gallery's promotional card on Collins' creations.

Collins credits Russell with supporting his art so that he can work on it full-time.

"I came here (to Arizona) to expand on what I'm doing and to get a full-time job on the side. I sent out more than 100 applications and couldn't find anything," Collins said. "I said to myself, 'I can't work - may as well do this.'"

He bought an old camper trailer, gutted it and put in a new floor. For $200, he had a studio twice the size of what he had been working in.

"I like working in small spaces. Everything is within reach," he said.

"Everything" really is everything. Collins finds his materials in flea markets, estate sales, and salvage yards. For vacations, he and his wife would explore ghost towns and old dumps.

The antique sewing machine part with its fancy scrollwork creates a man's bicep in a work in progress. He found it in a ditch in Holbrook.

One of his grandfathers was an inventor in Texas and took him along to scrap yards. The other grandfather was a machinist. He would put parts together and see faces, but he wasn't yet welding.

"The reason I like working with these things is the history behind each thing - some are 100 years old. By the time I get it, its usefulness is over and it's been discarded," he said.

As Collins was welding a toaster part onto his horse sculpture, the heat released a smell of bread. "I thought of an elderly couple in their 60s and wondered how many times did they sit and have toast with breakfast. Most everything - every little part - has a story to it. For me, I get to save some of that," he said.

Collins' works can be found in the Ian Russell Gallery and on Facebook by searching for Corey W. Collins.