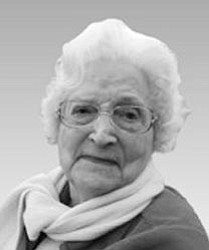 Elizabeth was born in Detroit where she and her husband Michael raised their family.

Elizabeth gave all to her family but also excelled from an early age in the textile arts and design. She expressed herself in these areas over her lifetime through sewing, embroidery, and her interest in the landscape and gardens that graced her home in Michigan.

In retirement, Elizabeth and Michael enjoyed traveling through the Western states and visiting grown children and grandchildren. They settled in Arizona in 1991, where they resided in Prescott and Scottsdale. For the past five years, Elizabeth has resided at the Good Samaritan Society Care Center, where she brought her special humor and kindness to each day for the other residents and caregivers.