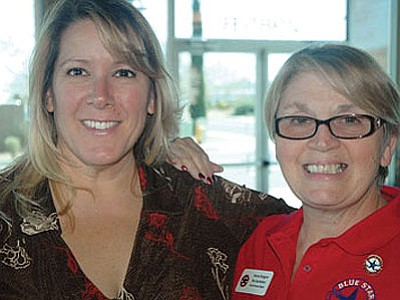 For parents, seeing a child leave home can be a humbling experience, more so when that child leaves for service in the Armed Forces.

"We are very well known, yet people don't know us," said Doreen Berggren, president of the Central Arizona Blue Star Moms chapter. "Once a son or daughter signs that paper, and they take that oath to serve and protect, that mother automatically is a Blue Star Mom, but unless somebody actually tells her there's somebody out there to help her through the initial separation time with her child, she doesn't even know about us."

The organization is similar to the Gold Star Moms, a group dedicated to mothers whose children died in the line of duty.

While she lives in Prescott Valley, Berggren's chapter serves Maricopa, Yavapai, Pinal and Gila Counties. There are currently about 60 members in those areas, Berggren said.

"We physically meet in Scottsdale, because that's where the chapter started. We meet the third Wednesday of every month at Oregano's Bistro in old town Scottsdale," she said.

Berggren's daughter, Karen, serves as a Captain in the U.S. Army, where she works as a Judge Advocate General (JAG), and recently returned from a tour in Kosovo.

"She came home last month and will soon be leaving to Germany for a few years," Berggren said. "We have empty seats every holiday. This is your child's choice and we respect that and we respect them, but we're still moms, and we still miss them."

Prescott Valley's new Cork and Cuisine restaurant owner Sherri Cook is doing what she can to raise awareness about the organization in the quad-city area.

Restaurant representatives, she said, strive to volunteer in the community. Working with the Blue Star Moms, Cook said, felt like a perfect fit.

"Once we got established, we wanted to be able to pick out a charity a month to help out in some way. We want to help out local, smaller charities that don't have as much funding or grants," Cook said.

Through Saturday, April 19, The Prescott Valley restaurant will offer 10 percent off their bill for anyone who brings a Costco gift card for $35 or more into the restaurant. Not only that, but those who donate will also be entered into a two-person "Wine me, dine me" giveaway worth $90. Cork and Cuisine is located at 2985 Center Ct. in Prescott Valley.

The gift cards, Berggren said, will be used to buy supplies for care packages that will be sent to military personnel.

"This care package is a little bit of love from home, so they know they have the support, they have people thinking about them," Berggren said.

The care packages include canned goods, such as fruits and more, beef jerky, magazines, playing cards, notes from school children and other items designed to help military personnel pass the time.

"Like a lot of things, in the military a lot of it is hurry up and wait," Berggren said. "Each care package costs approximately $35 and we do this every month."