Dells offer back on Council table 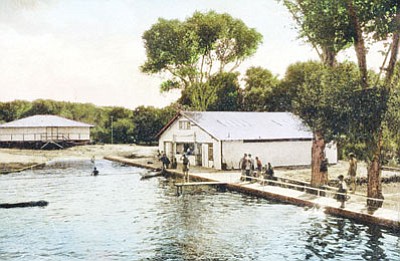 Courtesy photo<br> This 1930s-era postcard shows the Granite Dells Resort at the height of its popularity.

The council will conduct two voting meetings on Tuesday - one at 1 p.m., and another at 3 p.m. Both meetings will take place at Prescott City Hall, 201 S. Cortez St.

The 1 p.m. special voting meeting will include just one item - the proposal for the city purchase of privately owned land at the old Granite Dells Resort.

Prescott City Manager Craig McConnell noted on Thursday that owner Mark Wirth had made an offer to the city to sell 80 acres of the 83-acre parcel that contains the remains of the Granite Dells Resort.

A popular Prescott destination throughout much of the early-to-mid-20th century, the resort consisted of a swimming lake and other recreational features.

Wirth's letter, dated Feb. 5, offers to sell 80 acres of the Dells property to the city for $4 million. As a part of the offer, Wirth would give the additional three acres containing the former resort buildings and remains of the old swimming lake to the Granite Dells Preservation Foundation.

Along with Wirth's gift of the three acres, the Granite Dells Preservation Foundation also has received a pledge of $1 million from Sedona homeowner Foster Stanback for the preservation of the 80 acres. Half of the $1 million would go toward start-up costs, while the other $500,000 would go toward the purchase price - bringing the city's total cost to $3.5 million.

McConnell emphasized this week that the city currently has $500,000 available in its budget line item for open space, with $500,000 also slated for next year's budget - far short of the $3.5 million purchase cost.

Granite Dells Preservation Foundation members have suggested, however, that the city could defer one of its coming street projects to cover the additional money.

In 2000, the city combined the two issues - streets and open space - when voters approved a city initiative that extended a 1-percent street sales tax, and added open space into the mix. At the time, the city indicated it would spend as much as $40.7 million of the tax revenue on open space, with the remainder going to streets.

But through the years, the bulk of the money has gone to street projects. With the sales tax set to expire in 2015, the city has so far spent about $16.2 million on open space.

Of the $40.7 million reference, McConnell said Thursday, "The past is the past. As we sit here today, the offer is $4 million, and we have budgeted $1 million."

The city memo lists three alternatives for the council: negotiation of a city purchase of the property; a city contribution to the purchase by the Foundation or another nonprofit; or decline of the proposal.

The council heard a presentation on the proposal at last week's workshop and asked to expedite the consideration. McConnell said this week that he was uncertain whether the council would make a decision on Tuesday.

If approved this week, the new management firm could be on board at the municipal golf course by May 1.

• Consider a refunding (refinancing) of the city's debt for the Big Chino Water Ranch project - a move that McConnell said would save the city about $800,000 in interest costs, and would not extend the length of the loan past the original 2034 term. The city and the Town of Prescott Valley bought the ranch in 2004.

McConnell noted that the city had $20,000 in its budget for the event, and the fund currently has a balance of $17,000. The Prescott Chamber of Commerce is administering the money for the celebration, and has been working to bring in sponsors to help with the $80,000 cost.