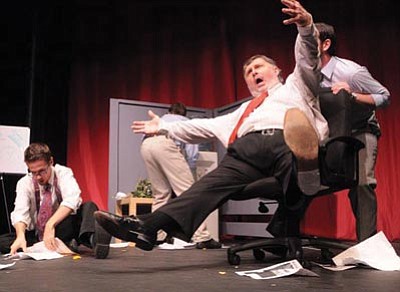 The talent of seven young playwrights will be in the spotlight Sunday when Prescott Center for the Arts presents the fourth annual Young Playwrights Festival on its main stage.

The PCA Education Committee discussed, scored and selected these seven short plays from submissions this past November.

Six of the seven playwrights, mostly from the Prescott area, have previously written plays that were selected for the festival. The three winners represent elementary, middle and high school levels. Five directors are working with the authors, and casts were chosen from a one-night audition session.

This year's plays and playwrights are "Sailing the High Seas" by Taylor Whittemore (first place); "Under the Rug," by Sedona Ortega (second place); "Stage Hand" by Glory Glidden (third place); "A Different Note" by Johan Glidden; "A Hero's Sacrifice" by Matthew Lanning; "It's Tense" by Devon Bonelli; and "Ring around the Rosie" by Sara D'Alessandro.

The plays will be presented in two performances. The first is at 2 p.m. and the second at 6 p.m. Admission is $7, cash only, at the door.

The plays' storylines vary from spoofy to drama. One is about a family who has a practical joker in its midst. One is about a young woman who seeks a career in showbusiness but it doesn't work out for her. Another play is about someone who wants to be a rock star. One is a musical about the Revolutionary War, and another is a comedy about a home in which everybody comes from a different era in history.

"This year's slate of plays is once again inventive, varied and intriguing," said PCA Executive Director Jon Meyer, who initiated the program four years ago. "Most intriguing for me is that we received and are producing the first-ever Young Playwrights Festival musical. I've quietly been hoping an adventurous young author would make the attempt at writing a musical for YPF, and lo and behold, my wishes have come to fruition. I've never spoken about my hope for a musical to be submitted, so it's doubly rewarding to finally get one," he said. "And I'm sure it's no surprise that I requested to direct it."