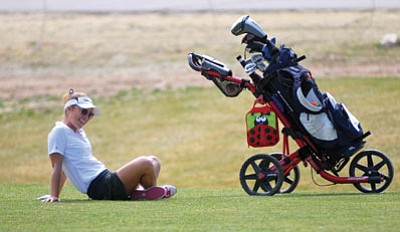 Les Stukenberg/The Daily Courier<br> ERAU’s Sarah Nishide chills out, March 10 at Antelope Hills. The Eagles women’s team this past Friday cracked the NAIA coaches’ poll with a national ranking of No. 20.

ERAU received 148 votes in the poll, putting the squad just ahead of 21st-ranked Lindsey Wilson (Ky.), which picked up 142 points.

To qualify for the national tournament with an at-large bid in late May, the Eagles would have to win the California Pacific Regional/Conference Tournament, which they'll host April 13-15 in Prescott, and finish in the NAIA's Top 25.

The NAIA National Championships are scheduled for May 20-23 at Wilderness Ridge Golf Club in Lincoln, Neb.