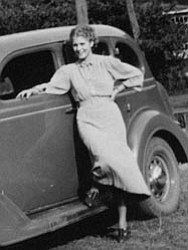 From 1932-1935, she delivered the Renovo Record to Farwell subscribers. She was the fifth of six children born to the Stones and was raised in the Methodist faith. She lived in Renovo, Pa., South Renovo, Pa., Dover, Del., Paradise Valley, Ariz., and Scottsdale, Ariz., before moving to Prescott in 1997.

She is survived by four children, Connie Biddle of Dover, Del., Joe Smyth of Scottsdale, Ariz., Pam Bush of Prescott Valley and Lisa Bason of Prescott, Ariz.; son-in-law Rod Larrabee; daughter-in-law Madonna Smyth; and her sister, Dorothy Fritchey of Harrisburg, Pa. She also loved, doted on and was proud of her 14 grandchildren; 43 great grandchildren; and four great-great grandchildren. Preceding her in death was her husband of 60 years, Bernard J. (Jack) Smyth, the former editor and publisher of the Renovo Daily Record; and brothers Harry, Charles, Malcolm and John "Jack" Stone Jr., all of Pennsylvania.

Mrs. Smyth felt particularly grateful that her youngest daughter, Lisa, an LPN and owner of the Pleasant Valley Nursing Home in Prescott, was able to provide loving care in her later years.

She loved reading, playing card games with family and friends, was a terrific Scrabble player and loved crossword puzzles. Even in her later years, she knitted dozens of caps for newborns and donating them to the YRMC Birthing Center in Prescott Valley.

Yet her main allegiance and biggest interest was her family, to which she devoted her life. She was the family's "designated worrier," always fretting over her concerns about her family's well-being.

She cared about public issues and many of her letters to newspaper editors were published. She also had a wonderful sense of humor, as demonstrated by this 2003 letter to the editor:

"I'm 85 years young and have been supporting the Diamondbacks through thick and thin (and I do mean thin). I have finally decided what is wrong with those boys: They are dehydrated from all that spitting! - Eva Smyth, Prescott."

Mrs. Smyth will be reunited with her husband in the Veterans National Memorial Cemetery in Phoenix. Private memorial services will be in Prescott and Phoenix.

Donations in her memory can be made to the Good Samaritan Hospice, 1065 Ruth St., Prescott, Ariz., which provided compassionate care for her in her final days.