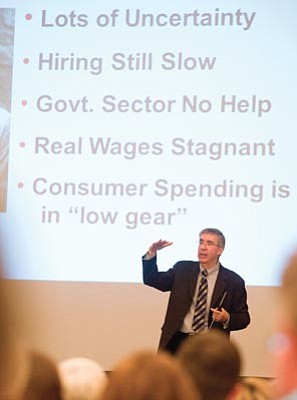 Les Stukenberg/The Daily Courier<br>Lee McPheters, a research professor of economics at the W.P. Carey School of Business at ASU, returned to Prescott Tuesday to give his annual talk “On the Road to Recovery.”

"We are not there yet," said McPheters, research professor of economics at the W.P. Carey School of Business and director of the school's JP Morgan Chase Economic Center. He described the state economy as "recovering but not recovered."

McPheters spoke for the third year in a row on the economic outlook for the greater Prescott area and Arizona. The ASU Foundation for a New American University arranged his visit, which drew an estimated 150 people to the Rowle P. Simmons Community Center here.

McPheters said the Prescott market regained 11 percent, or 1,200, of the 11,100 jobs lost during the recession. Employment peaked at 65,000 jobs in March 2007. Sources for his statistics include the U.S. Bureau of Labor Statistics and the U.S. Census Bureau.

The unemployment rate in the Prescott market dropped from 8.9 percent to 8.5 percent over the previous August. McPheters attributed part of the drop to people leaving the labor force.

McPheters said Arizona will add 70,000 jobs in 2014, with the outlook better than in most states, while also showing the eighth lean year of subpar growth.

McPheters also peppered his presentation with occasional humor by using photos and cartoons.

However, much of his talk was somber.

He said profits are rising while wages have been stagnant for years, contributing to income inequality that in turn is slowing the recovery.

Wages drove the outcome of the 2012 presidential election, McPheters said.

He said the U.S. economy added 160,000 jobs in August. However, the economy will have to add 100,000 jobs a month to accommodate people entering the labor force.

He fielded questions from several people in the audience.

He said he does not know how the Affordable Care Act, also known as Obamacare, will affect Arizona. However, he said it might be positive if it encourages people to seek other jobs knowing they will have health insurance.

His speech was "excellent," said Dick Hollister, a property manager who lives in Kirkland.

"I was hoping it would be a little more positive," Hollister said. "He has done a lot of research. He tells it like it is."

"With the new role of the college, these types of settings are imperative to engaging the community and creating that collaborative effort toward economic development," she said.