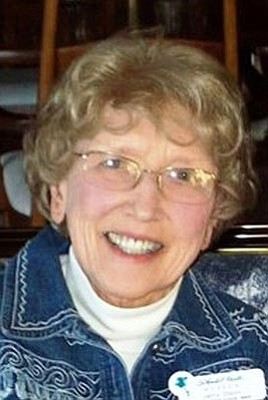 After a life dedicated to the spirit of volunteerism, giving to both man- and animal-kind, Geraldine Olson died peacefully last week at the age of 85. She spent her final year receiving tender loving care at Prescott Nursing and Rehabilitation Center after a series of mini-strokes left her unable to live independently.

Geraldine was born in Milwaukee, Wis., and lived there through early adulthood. She graduated from Rufus King High School and the University of Wisconsin. She worked at Milwaukee County Hospital as a medical technologist. It was there she met Dr. Detlof Olson on a blind date. They were married and, after his pediatric residency in St. Louis, Mo., they moved to Minneapolis, Minn. where they would live until retirement to Prescott, Ariz., in 1984. Upon arrival in Minnesota, Jerry retired from medical technology to devote her time to family, church and community.

Jerry became very active in volunteerism both at church and in her community. Her favorite volunteer experience was at the Minnesota Zoo in Apple Valley, Minn. She volunteered there for many years, giving countless hours of service. She even continued to serve after she moved to Arizona. She would visit every summer and still volunteer her Tuesday shift. At the zoo, she led tours and presented animal demonstrations; she was once rewarded for her time and experience with the opportunity to feed the beluga whales. Sherry, the volunteer coordinator, said, "Jerry was one of the best Tuesday volunteer day captains."

She continued this volunteer spirit when she moved to Prescott. She continued to give presentations and demonstrations at local elementary schools with her own collection of snakes and tarantulas. She gave tours of downtown Prescott for the Chamber of Commerce; she also served as a volunteer giving tours and demonstrations at the Sharlot Hall Museum. She continued these activities up until 2012 when she became unable to carry out her duties. She was always very involved in various activities at her churches both at Normandale Lutheran Church in Edina, Minn., where she headed up the banner making committee; and at American Evangelical Lutheran Church, where she was involved with Young at Heart and Hand in Hand, always looking for a way to reach out and help others.

Geraldine also loved antiques; bronzes, jewelry, clocks, and art, which led to her membership in the Prescott Questers.

She is survived by her beloved sister and brother-in-law, Audrey (George) and Keith Prosch of Prescott; and her daughter Amy Olson, currently serving in the United States Air Force in Washington, D.C. She is also survived by sister and brothers-in-law, Gloria (Olson) Ray, Angie (Schnitzler) Olson, Dorothy (Olson) Crosby Lee, Melly (Olson) and Jim Pearson, Voni (Olson) and Dale Swenson; and many nieces and nephews, the "Cousins by the Dozens."

King George the VI once said, "The highest of distinctions is service to others." Geraldine Olson's life was most certainly one of distinction. She will be greatly missed by family, friends and community.