Motorcyclist in critical condition after being hit by SUV in Dewey 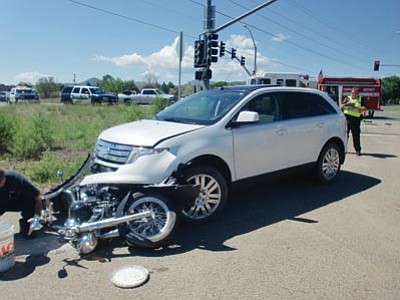 A 29-year-old Colorado man was flown to John C. Lincoln Hospital on Thursday after being struck while on his motorcycle. The driver of the vehicle was arrested on DUI charges.<br> PVPD/Courtesy photos

Prescott Valley Police and Central Yavapai Fire District emergency personnel responded to a motorcycle-versus-vehicle crash Thursday just after 11 a.m. According to a news release, the crash occurred at the corner of Highway 69 and Kachina Road in Dewey.

The driver of the 2004 Yamaha motorcycle, 29-year-old Joshua Anthony Lamirato of Colorado, was flown by helicopter to John C. Lincoln Hospital in Deer Valley with life-threatening injuries. While a helmet was found at the scene of the crash, police don't believe Lamirato was wearing it at the time of the crash.

The driver of the 2010 Ford Edge was later arrested on suspicion of DUI. According to the police report, 63-year-old John E. Sharkey of Wisconsin admitted to police that he had been smoking marijuana and using prescription drugs. He was booked into the Yavapai County Jail for one count of aggravated assault, one count of endangerment, criminal damage and two counts of DUI.