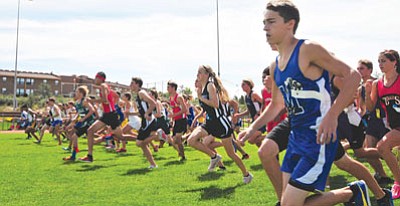 Les Stukenberg/The Daily Courier<br>Number 2 and 3 runners start the Ray Wherley Invitational at Embry-Riddle back on Sept. 8, 2012. After more than 40 years, this year’s running on Saturday figures to attract the biggest field ever.

It must be that time of year again at Embry-Riddle Aeronautical University in Prescott.

"The longevity certainly (makes me proudest)," said Wherley, the invite's founder who still lives in Prescott. "The format attracts a lot of people because of the ability for early-season exposure for virtually anybody on your team. And it's a good place to get out of the heat and run."

Prescott High coach and race director Clark Tenney said the invite will feature an event-record number of boys' and girls' squads from the Arizona Interscholastic Association's (AIA) Divisions 1 through 4.

Last fall, 25 teams with 700-plus runners took part in the early-season meet. This year, however, the Wherley field has ballooned to 36 clubs with more than 1,000 runners. Most of those squads are from Phoenix.

"We are very excited to come back and race in the Ray Wherley Invitational," said Flagstaff coach Trina Painter, whose program returns to the event after a short hiatus. "The girls' team is looking great on my side. We love the format of the Ray Wherley running the different runners against each other. I've seen the field. There are great schools from all over Arizona, from the larger schools to the smaller schools."

The host Badgers and fellow locals Bradshaw Mountain and Chino Valley are in the mix, per usual, as well as some squads from Tucson, including Catalina Foothills.

Four teams from last year's field won't return, but 15 new squads have come into the fold, Tenney added. In a twist, trophies will be awarded to the top-placing D-1, D-2 and D-3/4 schools.

"It will be our biggest and best field of runners ever," he said. "It really is a great meet that has grown mostly based on word of mouth. Word gets out that this is a fun one to go to. The kids enjoy it."

Ray Wherley, Prescott High's former cross-country coach from 1968-80 who also had a couple stints afterward as the Badgers' head coach, founded the originally titled Prescott Invitational in 1972 with a focus on the team concept.

He said that the size of the meet's field has remained fairly consistent through the years and is typically in the 20s.

Wherley and Tenney agree that the invite's unique format and the venue remain the main draws for programs around the state. The meet is split into seeded races and finishes are based on total team times.

Instead of one big varsity race, the Wherley gives every level of racer a chance to shine.

The top 10 individual finishers in each race receive a medal.

In Saturday's meet, the boys will run 3.1 miles, while the girls go 2.5 miles. This year's course changed slightly because of monsoon moisture, Tenney said, making it flatter and faster.

"The start and finish is basically in the same place, and it's the same deal in that the boys and girls start together and tend to finish together," he added.

Each participating team's Nos. 1-7 boys' and girls' runners have about a "50-50" chance at medaling, Wherley added, which is rare at other meets in any given season.

At the end of the varsity races, around 1 p.m., every team's score is tabulated based on its Nos. 1-7 runners' times to determine overall placement.

"The format has a good bit to do with keeping coaches' interest in bringing kids back to it," Wherley told the Courier last September. "The (Nos.) 5, 6 and 7 kids oftentimes don't get really any kind of recognition, even though they are vital to a team performance (at varsity meets). The format of this is really to equalize everyone. The No. 7 runner as far as a team performance is just as important as the No. 1."