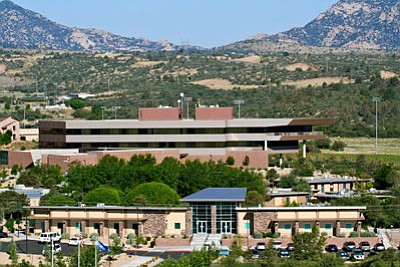 James R. Preston/Courtesy photo<br> In the foreground is the visitor center, including some administrative offices, on the Embry-Riddle Aeronautical University campus.

So, how are things going at Embry-Riddle Aeronautical University, Prescott's stellar school of higher learning and yearning? Well, on a scale of 1 to 10, they're flying high at a solid 11 there on that 538-acre campus off Willow Creek Road. This is based on my own analytical reading after a visit last week with the university's chancellor, Dr. Frank Ayers.

First, and foremost, is the school's standing and accomplishments in the academic arena, where ERAU has fielded the winningest teams over the last 20 years while its Golden Eagles have snared the national championships nine times, including the last two years. The national flight competition is fierce, as it involves going up against some 45 other universities nationwide in testing various flight and ground events such as precision landing, navigation and computer accuracy, along with many other aspects. And "they practice all year long," Ayers said, in their pursuit of excellence.

The caliber and dedication of students attending the university is high as reflected in their grades and SAT scores, and "every class is a little bit better as we keep raising the bar every year," Ayers noted. "This fall we have the largest enrollment in our 35-year history," he added, with 1,850 students, about half of whom are housed on campus.

Regarding the "yearning" in the above "learning and yearning" lead-in reference, it's not "pie in the sky" when it comes to ongoing educational upgrades at ERAU, but rather involves incorporating them. This is reflected in the university's putting into place five new degree programs over the next two years. Being installed this year are courses in cyber security, astronomy and software engineering, while the following fall will include the addition of a global business course and a masters degree in security and intelligence.

The catalyst for ERAU's success, Ayers emphasizes, stems from "our amazing faculty and staff. They're the best at what they do and really care about the students." And, he added, they're also "great members of the community" as they volunteer their time and expertise in various off-campus endeavors.

Sports are also an integral part of ERAU's lifeblood, and participating athletes tend to excel in both their studies and athletics. In fact, Ayers said, "Our athletes have higher grade point averages than the student body as a whole, which is also high - they're a smart group of people all the way around." This was reflected last month when members of the university's men's golf team -winners of the California Pacific Conference title - were named as the Academic Team National Champions for the National Association of Intercollegiate Athletics by the Golf Coaches Association of America. There were 175 total teams vying for the title, only five of which had GPAs of 3.5 or above, ERAU's Eagles topped them all at 3.733. In addition to winning the academic title, the golf team snared the California Pacific Conference crown and last year - in their first year in the conference - both of ERAU's men's and women's soccer teams won conference championships, while its women's volleyball team was the Cal Pac Conference runner-up.

The expansion of sports programs, along with the aforementioned academic curricula, also is taking place, Ayers said, with five new sports being added in the last three years. Getting their start this year are women's softball and men's and women's cross-country, with men's and women's golf having been launched two years ago.

Now, just a note about Ayers, who was named chancellor of the Prescott campus in 2012. Prior to joining ERAU he was a veteran of 26 years in the U.S. Air Force, and over the years has logged almost 6,000 hours of flight time in various aircraft types, with B-52s being a favorite conveyance. (According to my pocket calculator, this equates to some 250 24-hour days in the air!)

In closing, I would like to note that guests to the ERAU campus are welcome. And, after partaking of the cuisine, I can vouch for its cafeteria, which is open to the public for breakfast, lunch and dinner. I'm not talking a flight of fancy here, but rather a flight of fact.