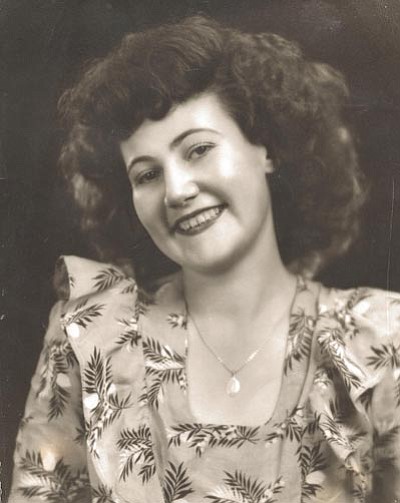 Marjorie Betty Jean Comstock Steward, 89, a resident of Prescott, Ariz., for 80 years, passed away Sept. 2, 2013. She was born April 3, 1924, in San Bernadino, Calif., to Francis Marrion and Lenora McGuire Comstock, who relocated to Prescott when she was nine months old.

She attended St. Joseph's Academy in Prescott and graduated in 1942. Betty furthered her education to study nursing at St. Mary's Hospital in Tucson.

She was preceded in death by her husband, W.O. Jack Steward, her parents, two sisters and four brothers.

Betty married Jack Oct. 20, 1946, in Woodward, Okla., before returning to Prescott in 1955. Betty tried her hand at flying an airplane, nursing, crew dispatching for the Santa Fe Railroad, and cashiering at Safeway.

The ambitious and energetic couple established Steward's Family Shoe Store in 1961 until their retirement 40 years later at ages 77.

She was a beloved wife, mother, sister and cherished "GG" (grandmother).

Overcoming many challenges, she never missed a party, enjoyed all family gatherings and fought to the end, earning the legendary name "Bounce-Back Betty." She will be dearly missed.