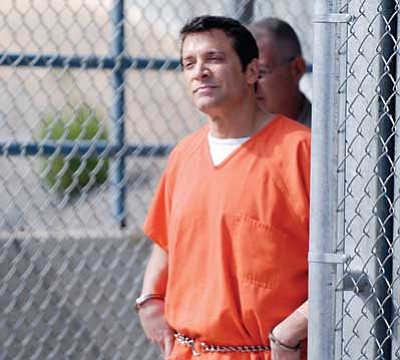 Jon Pelletier, Verde Independent, file/Special to the Courier<br> A shackled James Ray pleaded "not guilty" to the three manslaughter charges on Thursday, Feb. 4, 2010.

Just weeks after his release from prison, James Arthur Ray, the self-help speaker and author who was convicted of negligent homicide over the deaths of three people at a sweat lodge ceremony he conducted in October 2009 near Sedona, has withdrawn his appeal of that conviction.

In documents filed with the Arizona Court of Appeals Thursday, Ray, 55, signed an affidavit stating that he wishes to "avoid any possibility of a retrial and a resentencing." He further states that he is "fully satisfied with my counsel's handling of the appeal and cross-appeal."

Ray was sentenced to three concurrent two-year terms with the Arizona Department of Corrections in November 2011, after a four-month trial that ended with his conviction for the deaths of Kirby Brown, Liz Neuman and James Shore. Brown, 38, and Shore, 40, died inside a massive tent on the grounds of the Angel Valley spiritual retreat center near Sedona, in which Ray presided over a ceremony that lasted more than two hours. Neuman, 49, who was a volunteer member of Ray's "Dream Team" and also took part in the ceremony, died nine days later in a Flagstaff hospital.

Ray was released from prison on July 12 of this year and his term of community supervision is scheduled to end in October.

His local attorney during the trial, Tom Kelly, said he was less than pleased with his former client's decision to abort the appeal. He said he met with Ray, who has remained in the Phoenix area pending the end of his parole, earlier this week.

"I was disappointed with his decision and I believe justice requires a resolution of the points raised on appeal," Kelly said.

Two of the appeal points are of particular interest to Kelly and Ray's legal team from the Los Angeles firm of Munger, Tolles & Olson. The first is the contention that Yavapai County Attorney Sheila Polk, who personally prosecuted the case along with Deputy County Attorney Bill Hughes, engaged in prosecutorial misconduct, most egregiously in matters of disclosure.

More important to Kelly is the matter of "duty." A great deal of trial time was devoted to the argument of whether Ray had a duty, under criminal law, to aid his clients once it was clear they were in distress. Ray's attorneys argued that "duty" is largely confined to the civil realm, but Polk and Hughes convinced Judge Warren Darrow to instruct the jury that Ray's duty to his clients in the sweat lodge was indeed a criminal matter.

Kelly believes that question could have been answered in the appeal process.

"At what point do we transition between civil liability and criminal liability?" he asked. His concern is that this definition of criminal duty could extend in future cases to other risky activities such as sky-diving, river-rafting and even military and police work.

Relatives of the victims, on the other hand, expressed relief at Ray's action.

"Mr. Ray's decision does not surprise us because his conviction was inevitable, even with the information withheld from the jury," Tom McFeeley, Kirby Brown's cousin, wrote in an email Thursday. "Any effort to overturn his conviction would be a waste of time and money - money the millionaire Mr. Ray had claimed he no longer possesses. Instead we call on him - as we have with leaders in the self-help industry - to sign The SEEK Safely Promise, to ensure his transparency and the safety of those who follow his teachings and activities. Now is the time for Mr. Ray to make amends for his crimes, accept his responsibility, be the model for those in his industry and most importantly to live the way he tells his followers they should live their lives - with honesty and integrity."

McFeeley and other family members, including Brown's parents and brother, have founded a website, SEEK Safely, that works to advise people seeking spiritual guidance.

"We are very thankful that Mr. Ray has finally decided to accept the jury's verdict and that our family, as well as the families of Kirby Brown and James Shore, will not have to face another painful and lengthy trial," Clark wrote on Thursday. "We look forward to putting this ugliness behind us and focusing on a bright future. Most of all, we hope and pray that Mr. Ray has grown and learned from this experience, and will never endanger the lives of others again."

More than 50 people were crowded into the tent on that October day in 2011, participants in Ray's Spiritual Warrior seminar. Many of them testified at the trial. Ray himself became, in a sense, a witness for the state when Polk played a tape of his talk to the participants before they entered the sweat lodge.

"You will feel as if you're going to die - I guarantee that," Ray says in the recording. "But the true spiritual warrior has conquered death and therefore has no fear..."

Ray declined an opportunity to speak with The Daily Courier for this story.

Polk, who in conjunction with the Arizona Attorney General's office had filed a lengthy cross-appeal, issued the following statement.

"This office is pleased to learn James Ray has dropped his appeal. It gives the victims finality and confirms the convictions of James Ray on three counts of negligent homicide for the senseless deaths of Kirby Brown, James Shore and Elizabeth Neuman.

"We are grateful for the vital work of the Arizona Attorney General's office, who successfully handled the appeal and brought this case to its end."

The Court of Appeals must now accept or deny Ray's motion to withdraw his appeal. In reaction to his motion, the Attorney General's office responded with a conditional motion to dismiss its cross-appeal, objecting only to Ray's statement that his conviction was flawed.