Growing up in Prescott in the '80s: a former Hotshot 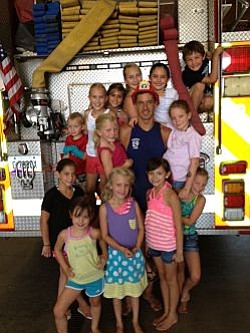 Cooper Carr is a young, native Prescottonian, a former Prescott Hotshot and currently a firefighter and youth advocate. Cooper generously agreed to answer my questions about what it was like growing up in Prescott in the 80's and how he became a firefighter. Cooper had so much to say about Prescott and his experience, that this will be a two part interview. (Read below for Part I.)

Cooper, were you born in Prescott? How long have you lived here? I was born here in Prescott in 1980. I have lived here for 31 years. I moved away for two or three years during college. I had two older brothers one of whom passed away in 1984 when he was struck by a truck on Ruth Street below Prescott High School. I attended Taylor Hicks, Washington, Mile High Middle School and I graduated from Prescott High School. I come from a low-income family and I have been gainfully employed since I was 12. [I started working] when I umpired girls softball games in the summer and I had numerous jobs of all types throughout my adolescence. After graduating Prescott High School, I got on with the Prescott Hotshots and I worked as a with them for six years before I switched to the structure fire side of things. I currently work for the Sedona Fire District. But I still live here in Prescott.

What part of town did you grow up in? I grew up kind of all over the place. We were not wealthy so we had to move a lot. But we had always lived in Prescott proper as Prescott Valley didn't really exist when I was growing up.

What major events do you remember happening in Prescott when you were a teen? I don't recall any major town events when I was growing up as Prescott (especially back then) was a small town. But obviously for me, when my older brother passed away when I was 4 and my father passing away a few years later were major events for me and my family.

Do you have a favorite memory of growing up in Prescott? Yes. My absolute favorite memory growing up here were 4th of July weekends when the water fights were still allowed. Our family would either post up on a street corner or in the back of a truck and cruise around with our water guns and enjoy an evening of friendly aqua warfare. I loved that event and I miss those days. I wish it were still allowed so I could give my two nieces that experience.

What else did you do for fun when you were a teen? I stayed busy playing sports (primarily soccer) throughout the entire year. But if I wasn't playing sports I would stay busy riding my bike around town with my friends and attending Yavapai College sporting events. However, my opinion is that Prescott is an entirely different town now than it was when I was growing up. With increased population and traffic I can no longer recommend [that] children and teens ride their bikes around town by themselves all day. And the accessibility of watching college athletics is becoming less and less. Yavapai College has one of the most successful soccer programs in junior college history and it is something that some families may want to take advantage of. But now over half of the games are played out in Prescott Valley. And the crowds that show up to watch the games are mere fractions of what they used to be. I always enjoyed watching the games and having a nice venue for much of the town to show up and check in with each other as a community. Also, other collegiate athletic programs that used to provide inspiration and entertainment to local teens are fighting to stay afloat due to budgetary concerns. I find this to be sad and I feel like now more than ever are teens are being short changed by us adults. [We need] to provide a sense of community as well as much needed inspiration for our teens to reach their full potential.

Cooper, you became a firefighter and a Hotshot after you graduated high school, right? What made you choose that path? I chose this path for a few reasons. One is because I wanted a job [with] excitement and travel. I have seen the Hotshots cruise through town in their buggies and I was always intrigued by them. I always liked the idea of a team coming together to achieve a common goal. I had a soccer coach (Tony Sciacca, you may remember him as the Incident Commander of the Doce Fire) at the time who was the superintendent of the Prescott Hotshots. I would ask him questions about the Hotshot crew and he would always encourage me to apply. So I took the necessary classes and managed to get hired in 2000 for a long, hard fire season. This experience was quite the eye opener. This is where I feel like I officially became a grown man. The work was challenging and the hours were long. I gained a sense of camaraderie with my fellow Hotshots that I never achieved during athletics. Throughout my time with the Hotshots I fought over 120 fires in 23 different states (including Alaska and Hawaii). It was everything that I hoped for in a job and then some. It also provided the chance in the winters to travel and to see different places, which gave me a great perspective of what our town was, as well as what our town could be. We have a lot to be proud of here in Prescott. We have wonderful community members and beautiful landscape. We also have issues that we would be foolish not to take a hard look at and to try and make changes. I would love to see us be more progressive in the ways we support our youth and our future. I believe that we need to provide our teens with the space and resources to succeed.

How do you think the tragedy in Yarnell has affected people your age and younger in Prescott? I think that the Yarnell Hill tragedy has devastated nearly the entire population of the quad-city area. It seems as though everyone in town had ties to that crew or one of the families in one way or another. I think for that for our youth it has been obviously extremely tragic as well as a very grounding experience. I think that most teens in a town such as ours rarely get an up-close look at tragedies like this one, on such a scale as this, and never this close to home. It does however give me hope that our youth is expressing their emotions publicly by showing up for these families at charity events, as well as purchasing supportive decals for their cars and trucks to help the families and show their support (we all know that most teens take the decal situation on their vehicles quite seriously). As a community that has been brought to its knees, I must say that I personally am extremely proud of our town in its response to the Yarnell Hill tragedy. And I have yet to speak to any of my fellow firefighters or fellow Hotshots who haven't shared my admiration and gratitude for the town's response.

Next week in Part II of the interview, read more about what Cooper remembers about growing up in Prescott and what his hopes are for the youth here today.