A Smokin' Good Time' was had by all at BBQ competition 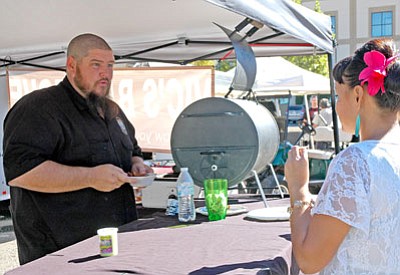 Robert Ensley, who partnered with Victor Barnard as Vic’s BBQ, hands a sample of brisket and pork to a patron at the Smokin’ Good Time BBQ fundraiser for the Coalition for Compassion and Justice outside Tim’s Toyota Center Saturday. Vic’s placed first in pork and second in brisket, and 9th overall of the 24 teams competing.<br> Trib Photo/Cheryl Hartz

The event outside Tim's Toyota Center was a fundraiser for the Coalition for Compassion and Justice.

Not all teams entered all categories, which included pork, pork ribs, chicken, dessert, salsa, chili, and brisket over the two-day competition.

Robert Ensley, owner of a tire shop, and Victor Barnard, a butcher for Smith's grocery, entered as Vic's BBQ out of Ft. Mohave/Bullhead City. They've competed in several local competitions, but this was their fourth official venture, Ensley said.

It was successful for them, as they placed first in pork shoulder, second in brisket and ninth overall.

"I had to," Barnard said with a grin. "I was a single dad then and on the weekend I cooked meals for the whole week."

"The teams were extremely happy with the event, and we hope to grow 'A Smokin' Good Time' to become a fall signature event for the Coalition for Compassion and Justice," executive director Gail Kenny said.