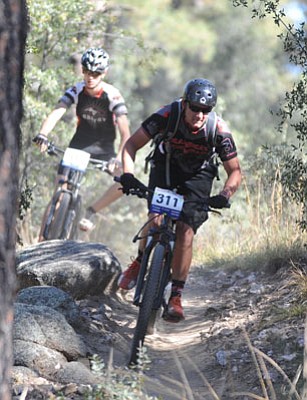 More than 160 young mountain bikers took to the trails Sunday as the Arizona High School Cycling League visited Prescott for its third racing stop of the season.

Local high school mountain bike teams took advantage of the course at the White Spar campground in Prescott to move up in the overall standings.

The 4.1-mile course twisted up and down and around the Prescott National Forest surrounding the campground. Many of the competitors at the awards ceremony called the course fun, technical, gnarly, hard, fast, swoopy, and a blast, among many other things, but all had a smile after finishing.

In one of the most exciting races of the day Prescott's Andrew Myrick edged out Cody Gagnon of Buena High School by 1 second over four laps in the Junior Varsity boys race.

With one race remaining in the season series, Prescott sits in second place with 190 points behind Tucson High Magnet School. Bradshaw, Chino and Northpoint are seventh, eighth and ninth, respectively with just 151 points separating the three.

In individual season standings, Phoebe Teskey, Hannah Madler, Rachel Medevielle, Nicole Linebaugh and Elisa Leblanc sit 1-5 in the JV girls category. Myrick is just 28 points behind first place, and Bryce Beaumont is only 43 points behind fifth in the JV boys.

Sophomore Zoe Dunn is just one point out first in the girls' division, and Hannah Madler sits right behind in third. Sophomore William Hughes sits in fourth among the boys, Gary Medevielle is sixth, and Duncan Mills is ninth with just 100 points separating fourth through ninth.

Dylan Lundmark is in second among freshmen boys at just 86 points out of first, but only two points ahead of third place.