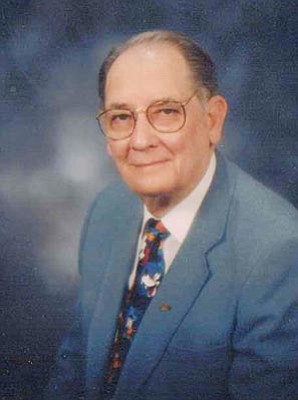 Edward Darrell Evenson Sr. went home to be with his Lord on Oct. 19, 2013. He was surrounded by family.

"Darrell" was born May 30, 1929, in Tulsa, Ariz., to Edward D. Evenson and Willa Fern Evenson. In 1941, he moved with his family to Phoenix, Ariz. He was a 1947 graduate of North Phoenix High School. He enrolled in pre-med studies at the University of Arizona in the fall of 1947 with aspirations to be a pharmacist.

In December 1948, he was in a serious car accident that altered his life journey dramatically. After many months and surgeries later, he was invited by a friend to North Phoenix Baptist Church, where he accepted Christ Jesus into his life as Lord and Savior and then followed God's calling into pastoral ministry. In 1952, he was ordained to the ministry and received his license to preach, and he married his college sweetheart, Mildred J. Compton.

In 1964, he became the Director of Missions for the White Mountain Association (of Arizona Southern Baptist Convention) and started the First Baptist Church of Pinetop. He served Baptists all over the White Mountain area of Arizona until June 1967. That June he uprooted his family and moved to Las Vegas, Nev., where he pastored the First Southern Baptist Church of Las Vegas until 1975. After leading a growing ministry in Las Vegas, God called Darrell once again to serve as Director of Missions in 1975, but this time in the Pacific Northwest with the Interstate Baptist Association for the Northwest Baptist Convention in Portland, OR, where he retired in 1994.

In 1997, he returned to Arizona, settling in Prescott Valley. He was an active member of Willow Hills Baptist Church in Prescott until his health would no longer permit him to attend; but he used any opportunity to share with a neighbor, friend or loved one about the awesome love of God.

Darrell is survived by his wife Mildred Evenson; his children, Karen Massingill of Phoenix, Ed Evenson of Livermore, Calif. and Carole Flegal of Nampa, Idaho; a brother, Jerry Evenson of Phoenix; seven grandchildren; and many nephews and nieces. He will be greatly missed.

A Celebration of Life service will be at 10:30 a.m. Saturday, Oct. 26, 2013, at Willow Hills Baptist Church in Prescott. Interment is at Greenwood Memory Lawn in Phoenix, Ariz.

In lieu of flowers, donations may be sent to the following (either through secure online giving, or postal mail):