Chew on This: Smoking-good barbecue on the weekend menu at Tim's Toyota Center 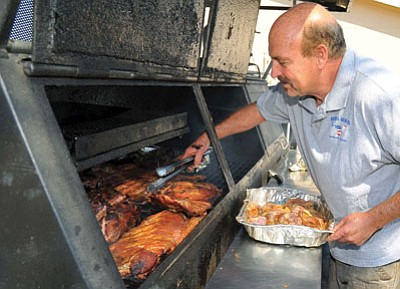 Matt Hinshaw/The Daily Courier, file<br> Mike Jeffrey owner of Montana Barb-BQ Company turns a few of his meats at a recent event. Montana Barb-B-Q will serve as a “plate vendor” at this weekend’s cookoff at Tim’s Toyota Center in Prescott Valley.

More than 25 teams will participate in the "Smokin' Good Time" at Tim's Toyota Center in Prescott Valley this weekend, Oct. 19 and 20.

The event, benefiting the Coalition for Compassion and Justice (CCJ), is an officially sanctioned Kansas City Barbecue Society (KCBS) competition. Samples and food vendors, not to mention live music, are included in the Friday and Saturday barbecue event. Featured Friday music includes the band MIX, Sky Daddy Conwell and Michael Nitro beginning at 3 p.m. Saturday's lineup includes Becky Dalke from noon to 1:30 p.m., and Amber and Jae from 2-3:30 p.m.

"A Smokin' Good Time brings competitors from all over the Southwest. They bring their smokers and cookers and they barbecue according to KCBS rules," said CCJ Executive Director, and event coordinator, Gail Kenny. Proceeds from the event benefit CCJ and their various programs.

"It's the first time CCJ is doing this," Kenny said. "It has turned out to be a really good fit for CCJ. I've been to a number of these kinds of events. They typically attract thousands of people. People learn a lot about what competition barbecue is like. It's different than what people typically get in restaurants."

A $10 admission ticket will get you three tastings and admission to both days of the event. Each tasting is approximately one sample cup or a rib. Extra tasting tickets are also available for $2, which gets attendees an additional two-ounce sample. Children 12 and younger get in free. Sponsors include Great Circle Radio and the Prescott Valley Hampton Inn and Suites.

"That's the time that people from the area should focus on being there," she said. "We have one ticket price that covers both days, so people can listen to music and eat food. We're focusing on having people come in the afternoon on Friday and Saturday afternoon if they want to come out for the People's Choice."

Cookers compete for trophies and prize money during the competition.

Prescott Valley cook James Oudin has not competed for six years, but decided he would give it a shot this year.

"I plan on cooking the four meats," Oudin said. He declined to share any of his cooking secrets, however.

"It's barbecue magic," he said. "I use two horizontal smokers."

Other local competitors include Toni Nipper and Stephanie Stafford of Dizzy's Deli and Goodie Shop, as well as Kevin Leffler and John Garrett of Prescott Valley's Fireside Grill, and Mike and Lynn Jeffrey of the Montana

Barb-B-Q team based out of Prescott Valley.

Salsa and chili will be offered Friday night from 5:30 to 8 p.m. Barbecued meats available on Saturday include chicken, ribs, pulled pork and brisket.

"There will be a little bit of everything on the barbecue side," Kenny said.

Besides competing in the event, Montana Barb-B-Q will also serve as a "plate vendor" for those who want a little more than tastings at the event.

"People can go in there and buy barbecue anytime the event is open," Kenny said.