Get Your Mojo Workin' this Friday at Yavapai College 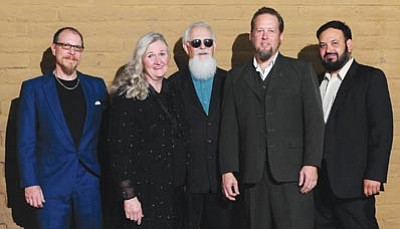 When he talks about his favorite musical genre, the blues, musician Steve Grams repeats this "old blues saying": "If you don't like the show, you've got a hole in your soul and you don't eat chicken on Sunday."

But, the Tucson entertainer doesn't anticipate a frown in the crowd with Lonely Street Productions brings "Get Your Mojo Workin'! A Salute to Chess Records" to the Yavapai Community College Performance Hall this Friday evening.

Chess Records was a Chicago-based record company that specialized in blues, rhythm and blues, soul, gospel music, and early rock and roll, with a little jazz in the mix.

"They were the premier blues music label form the 50s and 60s," Grams said, punctuating his statement with a plug for blues music.

"Some people have an image of blues music. It's insane. They think it's depressing, boring and weird.

"It's really a happy, feel-good, foot-tapping kind of music," Grams said. And, after a concert, Grams has heard audience members say, "I didn't even know I liked the blues," unbeknownst to them that this style is the genesis of such genres as rock and roll and jazz, for example.

The show with the Bad News Blues Band in the spotlight begins at 7:30 p.m. Tickets are $26 and are available at the Performing Arts Center box office from 10 a.m. to 4 p.m. weekdays and one hour before show time. Call the box office at 776-2000 for details or go online to www.YCPAC.com to get tickets.

The Bad News Blues Band performance will feature special guest Tom Walbank on harmonica and slide guitar, and he will be joined by Grams on his upright bass and other instrumentalists on drums, guitar and tenor and baritone saxophone.

The performers promise to bring "legendary tunes to life once again" when the band strikes up hits of the era to pay tribute to Chess Records.

Sets will highlight the music of superstars ranging from Chuck Berry and Muddy Waters to Howlin' Wolf and Etta James.

All of the members of Bad News Blues Band are professionals, Grams said. Each is a member of the Arizona Blues Hall of Fame, and this summer Grams was inducted into the Iowa Rock 'n Roll Music Association's Hall of Fame.

Grams grew up in Sioux City, Iowa, and although his parents had no musical inclination, he "gravitated" toward music. "My parents encouraged everything I did," he said. He wanted a piano, so they bought him a piano. He wanted a trombone, so they got him one. They bought his sister a guitar, and she knew Grams wanted it, so she gave it to him.

The Iowa Rock 'n Roll Hall of Fame's website says that Grams' career began in Sioux City "when he was paid to play for the 16th birthday of a classmate, and her father offered $20 for him and the other members of the Moondawgs to 'stop playing.'"

But, undaunted, Grams kept it up, and has been playing for nearly 50 years.

"The Bad News Blues Band has been together for 20 years and toured all over the world," Grams said. "It's hard to name a place we haven't played."