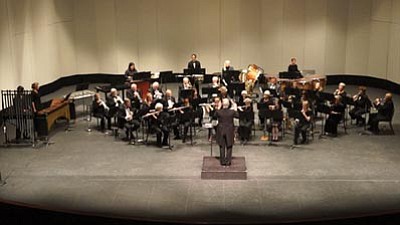 The Yavapai College Concert Band, Symphonic Band and Symphony Orchestra will pay homage to the American Civil War on Sunday afternoon when they present their fall instrumental concert at the college's Performing Arts Center.

When the audience arrives for the concert, which begins at 3 p.m., greeters from the Daughters of the Confederacy of Prescott will be waiting at the door in authentic American Civil War costumes - ladies in their evening finery and a gentleman in dress tails and top hat.

The concert will open with some lively tunes by the Concert Band, directed by Gary Flowers. One familiar fun piece they are playing is "Baby Elephant Walk" by Henry Mancini.

The Symphonic Band and Symphony Orchestra, under the direction of Dr. Roy Breiling, will then present music from the American Civil War era. Compositions played by the Symphonic Band include the "Lincoln Portrait," with a narration by Kevin Henry. This is followed by a medley called the "American Civil War Fantasy," a moving piece with songs from the North and the South.

Music that the Symphony Orchestra will play includes a picturesque Civil War piece titled "Shenandoah Spring 1862." There will be a duet of "Ashokan Farewell," with Emily Nardo on violin and Brian Moss on guitar. The concert will close with the well-known Peter Wilhousky arrangement of the "Battle Hymn of the Republic." The orchestra will be accompanied by the YC Choral Union for the "Battle Hymn."

Tickets are $7. They may be obtained at the YC Performing Arts Center box office, by calling 776-2000, or at www.ycpac.com. Children under 14 are free.

The 150th anniversary of the American Civil War offers this generation of Americans an opportunity to commemorate our country's greatest national crisis. Between 620,000 and 750,000 soldiers from the North and the South lost their lives.