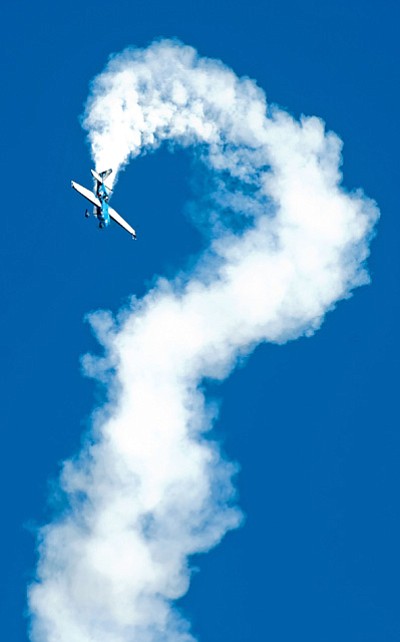 Matt Hinshaw/The Daily Courier<BR> Embry-Riddle Alumnus Melissa Pemberton performs a hammerhead, above, during her aerobatic routine Saturday morning at the ERAU Wings Out West Air Show at the Prescott Airport. Below, Pemberton cuts a ribbon with the tail of her inverted aircraft.

A black, white, and blue Edge 540 rips through the sky and tumbles artfully, performing for a crowd of more than 300 students, alumni, and guests.

Melissa Pemberton, a 2005 Embry-Riddle Aeronautical University graduate, was one of three aerobatic performers at the "Wings Out West" air show Saturday morning at Prescott Airport.

"It was encouraging to see a woman who graduated with my same major (perform)," said spectator Savannah Vairin, an ERAU junior.

Later this week, Pemberton will be competing in the World Aerobatic Championships in Texas with the U.S. Unlimited Aerobatic Team.

Pemberton was not the only female flyer this past weekend. Julie Clark also performed at the event in her T-34. Clark has more than 32 years of solo aerobatic air show flying, with one of her very first shows having been at Love Field in the early 1980s.

"I love flying here and meeting with the students," said Clark. "We need these kids to be our future (in aviation)."

Also performing at the event was ERAU-sponsored pilot Matt Chapman, who has been flying aerobatics since 1984. Chapman performed several advanced maneuvers including the knife-edge, rolling harrier, and tail slide. When not performing at air shows, Chapman is an airline captain.

The week-long homecoming celebration at ERAU known as Octoberwest includes a parade, career industry expo, and fireworks, and caps off with the air show at the school's flight line. Alumni from around the world are invited to bring their aircraft to display and talk about with students past and present. There is also a display of remote-controlled model aircrafts by the on-campus R/C club Casa de Aero.

The event was exclusively for ERAU staff, students, and alumni, but the public could watch the show from multiple vantage points around the city and airport. Thompson said Embry-Riddle's chancellor, Dr. Frank Ayers, is working to bring a public air show back to the Prescott area.